Politicians and Muslim leaders are condemning the defacing of an Edmonton mosque with a swastika – the latest example in a string of anti-Muslim attacks and vandalism in the city.

The vandalism at the Baitul Hadi Mosque was reported this week, though Edmonton’s police department says the graffiti may have been there since April, when similar vandalism was reported nearby. Investigators are consulting the department’s hate crime unit.

Crimes against Muslim Canadians have received renewed attention in the wake of an attack in London, Ont., in which four members of a family were killed and another injured when a man driving a pickup truck ran them over in what police described as a hate-motivated attack.

There have been several incidents in recent months of attacks on Muslims in Edmonton, including assaults against women wearing hijabs.

Alberta Premier Jason Kenney condemned the vandalism and said he hoped the perpetrators are caught.

“So hurtful to see this,” he wrote on Twitter. “I have visited this mosque many times. A wonderful community made up of proud Canadians who are constantly giving back to our broader community.”

Edmonton Mayor Don Iveson said in a statement that he was “disturbed and angered” by the incident.

“These acts of hate must stop,” the statement said. “Our Muslim community deserves to feel safe and welcome in our city. Full stop.”

Nasir Butt, the mosque’s imam, condemned the vandalism in a statement.

“We are deeply disturbed by the rising acts of violence against the Muslim community,” the statement said.

Police in Edmonton say two women wearing hijabs were sitting in a mall parking lot in December when a stranger shattered a window, assaulted the passenger as she tried to flee and then assaulted the second woman when she tried to help. A man faces charges of assault and mischief in that case.

In March, a man was charged after three allegedly hate-motivated attacks on women in Edmonton.

In the first, police said the Black victim was followed inside a convenience store on Jan. 18 and allegedly assaulted.

The second and third attacks took place on the same day in early February. One woman was wearing a hijab and the other wore a burqa.

Jibril Ibrahim, president of the Somali Canadian Cultural Society of Edmonton, said incidents such as the attack in London, as well as the mosque vandalism and recent assaults in his city, should prompt a wider discussion about the source of anti-Muslim hatred in Canada and how best to confront it.

He said more work needs to be done to study the extent of the issue in Edmonton and elsewhere in Canada with an eye to come up with a comprehensive strategy that ensures policymakers, the police and members of the Muslim community are all working together.

Mr. Ibrahim said all too often politicians condemn such incidents without following up with action, or launch anti-racism task forces without adequately involving the affected communities.

“None of those entities – whether it’s a province or city – is talking to the community affected, other than making a statement on TV,” he said.

“We appreciate this empathy. We appreciate what they are saying. But the time to talk and sympathize is gone now.”

The City of Edmonton started an anti-racism committee in the fall of 2019. The Alberta Anti-Racism Advisory Council was launched the same year under the previous NDP government.

Safwan Choudhry, spokesperson for Ahmadiyya Muslim Jama’at Canada, said news of the vandalism at the mosque is especially concerning in light of the attack in London.

“These incidences are not new and they are increasing,” he said. “This incident [at the Edmonton mosque] really hit a nerve.” ‘Racism is a real problem’: Black and Muslim women fearful amid rise in assaults in Edmonton
March 3, 2021 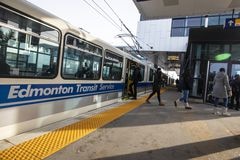