Meaningful consultation with Indigenous communities is necessary before building new resource projects but local groups don’t have a veto to block infrastructure they don’t like, Prime Minister Justin Trudeau’s special adviser to the Prairies told energy leaders in Calgary.

Jim Carr, a Winnipeg-area MP given the task by Mr. Trudeau of lessening feelings of alienation across the Prairies, said British Columbia’s Coastal GasLink pipeline project has the federal government’s support, despite mounting criticism from human-rights organizations. The project is in the national interest, he said, adding that Ottawa expects local communities will find a solution to the long-running conflict over the pipeline.

“Our aim is to get our natural resources to foreign markets. That’s the national objective. We think the Coastal GasLink project is a good project for Canada,” he said. “The local people who are responsible will ensure that it’s done in a way that’s acceptable for the majority of people.”

The pipeline’s owners have signed deals with the elected representatives of First Nations all along the 670-kilometre route, however a group led by hereditary leaders of the Wet’suwet’en Nation is seeking to block construction of the pipeline project within their traditional territories.

A UN committee as well as B.C.’s independent Human Rights Commission have said that the construction must be stopped on the pipeline until free, prior and informed consent is obtained from local Indigenous communities affected by the project. The UN Declaration on the Rights of Indigenous Peoples, known as UNDRIP, requires governments and businesses to get that level of consent. There is no definition for the meaning of consent.

According to Mr. Carr, UNDRIP is now the guiding document for Canada’s resource sector. Asked by energy leaders at a Calgary Chamber of Commerce event what the declaration means for new projects, the former natural resources minister said it was clear. “If we haven’t figured it out yet, we’re not very smart: If we don’t properly and meaningfully consult Indigenous peoples, there won’t be any major projects built,” he said.

“The courts have told us that that is a requirement. We have listened to the courts and I think our consultation has been thorough,” he added. As natural resources minister from 2015 to 2018, he was focused on getting court approval for the construction of the expansion to the Trans Mountain Pipeline.

Alberta energy businesses that build partnerships with local First Nations – using their companies to provide services and equipment while helping Indigenous governments invest in the oil patch – are already leaders in building those partnerships, according to Mr. Carr.

The Union of B.C. Indian Chiefs has said the provincial and federal governments need to respect the jurisdiction of the Wet’suwet’en hereditary chiefs and enforce the eviction notice they issued demanding the company building the natural gas pipeline leave.

“Free, prior and informed consent of the proper title and rights holders impacted must be achieved prior to the approval of any project affecting their land, territories and other resources,” the union said in a statement on Jan. 7.

Along with Mr. Carr, B.C. Premier John Horgan has also said the Wet’suwet’en do not have a veto over the project.

The Premier said he disagreed with criticism last week from the UN Committee on the Elimination of Racial Discrimination, which called on Canada to halt a number of energy projects, citing a lack of Indigenous consent.

“Look at the work that’s been done to try and address those issues and I think that’s what we’ve been focusing on rather than voices from New York,” he told reporters in Victoria Monday.

Asked by the Calgary crowd what his job is in Ottawa, Mr. Carr said it is to recognize the anxiety across the Prairies where a profound economic slump has been going on for years and to get the federal government to help. “I want to make you happy,” he told Calgarians. 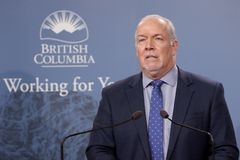 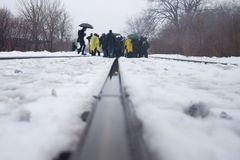