COVID-19 cases disrupted the reopening of two Alberta schools on Tuesday, but Premier Jason Kenney said his government has accepted that such infections are inevitable and don’t warrant closing down all classrooms.

“We’ve always said that there will be infections in the schools … that’s why we’ve put in place a number of protocols based on the scientific advice of our chief medical officer of health in consultation with superintendents and school boards,” he said.

“We believe it’s a strong plan and we’ll make future adjustments as necessary. We’re all learning through this as we go.”

Meadows Ridge School in Okotoks, south of Calgary, did not open as planned after a staff member was diagnosed with COVID-19.

Principal Rebecca Forchuk and Foothills School Division Superintendent Chris Fuzessy wrote in a letter Monday that the staff member was last in the school at noon on Friday and that symptoms began that evening. Officials learned of the positive test result at 6 p.m. Monday.

“While Alberta Health Services has indicated the school is safe to remain open, due to the late hour and to allow public health time to complete their contact tracing, we are delaying the start of school for some Meadow Ridge families,” they wrote.

The school said it would inform parents whose children were to start classes Tuesday of new staggered entry dates.

At another school in Okotoks, children burst out of the doors Tuesday afternoon and many immediately tore off their masks.

Dora Helli was picking up her daughter, who’s in Grade 4, and her son, who just started kindergarten, at Westmount School.

She heard about the closing at Meadow Ridge, she said, but it didn’t make her hesitate about sending her children back to class.

“My kids were really excited. It was a long break but they were ready to come back and see their friends,” she said.

“It’s time to go back to some kind of normal.”

Canyon Meadows School in Calgary opened as planned, but the principal, assistant principal and administrative secretary were forced into a 14-day quarantine after someone at the school tested positive for the novel coronavirus.

In a letter to parents, principal Bobbie Schmidt said it’s believed exposure happened a week ago and that a retired, experienced principal would be on-site while the others isolate.

Alberta Chief Medical Officer Dr. Deena Hinshaw said Monday that she was notified over the weekend of a “small number” of schools with COVID-19 cases or exposures in staff, but she did not elaborate.

The Peace River School Division, northwest of Edmonton, posted a notice on its website saying it was delaying the start of its school year until after Labour Day to give teachers more time to get used to safety protocols, plan for at-home learning and to ensure there are enough caretakers and supplies in schools.

The Alberta government cancelled kindergarten-to-Grade-12 classes in mid-March as COVID-19 began to spread in the community.

The province had 1,398 active cases as of Tuesday with 164 new infections. Both Mr. Kenney and Dr. Hinshaw have said the risk of spread in schools has to be balanced against the significant harms of keeping children home indefinitely.

Under Alberta’s school reopening plan, staff and students in grades 4 to 12 must cover their faces when they’re in common and shared indoor areas where physical distancing cannot be maintained, such as hallways and buses.

The rules are eased for classrooms so that masks don’t get in the way of learning and communication.

Education Minister Adriana LaGrange is to announce Wednesday how $260-million in federal money for schools is to be spent.

Mr. Kenney said suggestions that the money should go toward cutting class sizes to allow for more physical distancing are unrealistic. He estimated such a proposal would cost $4-billion.

“We appreciate the additional federal funding, but there is no world in which you could reduce class sizes in half and reopen the schools for the current school year … It’s simply fictitious. It has nothing to do with reality.”

Jason Schilling, president of the Alberta Teachers’ Association, said Mr. Kenney’s cost estimate is inflated, and the group is not advocating for reducing class sizes by half.

“What we would like to see are more resources and supports provided to school divisions and principals so they have more opportunities to reduce the size of our largest classes, especially at the upper grades,” he said in a statement.

“Too many teachers are already reporting class size assignments in the mid-to-high 30s.”

With files from Bill Graveland 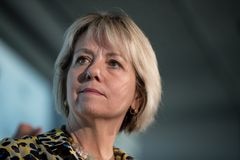 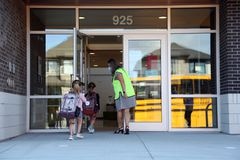 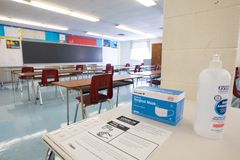