Coronavirus information
The Zero Canada Project provides resources to help you make the most of staying home.
Visit the hub
Carrie Tait
Published March 31, 2020 Updated April 1, 2020
Comments
Please log in to listen to this story. Also available in French and Mandarin. Log In Create Free Account

Shawn Auger was a hockey coach, youth worker, father of three and husband. He joked earlier this month about how the novel coronavirus would spark a baby boom. Four days later, he was diagnosed with COVID-19, and 14 days after that, he was dead.

Mr. Auger was 34, making him an outlier when it comes to COVID-19 fatalities. The elderly are most at risk of severe symptoms and dying of the disease, but experts are increasingly urging young and middle-aged adults to take steps to protect themselves.

Adults under the age of 40 account for 10 per cent of hospital admissions related to coronavirus in Canada, according to the federal government. While seniors are the most vulnerable to COVID-19′s harshest symptoms, Theresa Tam, Canada’s Chief Public Health Officer, on Tuesday noted the disease, for the first time, has killed a Canadian in their 30s.

“The young are not spared from severe outcomes,” she said.

Mr. Auger died Monday. He had asthma, and such underlying health conditions amplify COVID-19 risks. The disease has killed close to 100 people in Canada, and infected more than 8,500 as of Tuesday evening. Detailed information on fatalities is limited across the country. In Quebec, no one under 60 has died of the illness, according to officials. In Ontario, officials said COVID-19 has killed three people under 60 years old.

Mr. Auger worked with youth in High Prairie, about 370 kilometres northwest of Edmonton, according to his wife, Jennifer Auger. He went to a National Hockey League game in Edmonton on March 8, and stayed in the city the following day. Officials told his wife it is also possible he was infected at the gym. Mr. Auger felt unwell on March 13, and received a positive test for COVID-19 on March 16. He was admitted to hospital shortly after.

In Alberta, 49 people have been admitted to hospital because of the coronavirus, and nine of those are between the ages of 35 and 44, according to Alberta Health. That equates to about 18 per cent.

Canadians between the ages of 40 and 59 make up 37 per cent of the COVID-19 cases analyzed in the federal government’s most recent report. This cohort represents the highest proportion of Canada’s cases, followed by people between 20 and 39, who make up 29 per cent of cases.

People over the age of 60 represent roughly 30 per cent of Canada’s coronavirus cases, but make up 62 per cent of both hospital and intensive-care admissions, according to the report, which was updated Monday. It is based on data from 3,430 cases of COVID-19 in Canada.

“Denial is part of the human condition,” Dionne Aleman, a mechanical and industrial engineering professor at the University of Toronto, said. Her specialties include applying math to health-care information. “Being able to process risk is something humans are inherently not good at."

Younger people should not be comforted by statistics that show they are less likely to end up in hospital or die because of COVID-19, she said.

“It is like rolling a die. It might be unlikely that if I roll the die that the number one pops up, but that doesn’t mean that it is never going to happen.”

While Mr. Auger had an underlying health condition, COVID-19 has also killed healthy non-seniors in Canada. Keith Saunders, a 48-year-old grocery-store manager in Ontario, died last week. Heath officials could not trace his infection to travelling, and said he did not have underlying conditions, according to CTV.

With reports from The Canadian Press, Les Perreaux, and Laura Stone 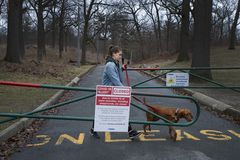