A patient at a Calgary hospital who died after contracting the more-contagious Delta variant of COVID-19 was among a group of people who caught the virus at the hospital despite being fully vaccinated.

The outbreak at Foothills Medical Centre had already been raising alarm because nearly half of those infected already had two doses of vaccine and others had a single dose. The death of a fully vaccinated patient, a woman in her 80s, has also added to the concern about the increase in variant cases in Alberta. The Delta variant, while still a small percentage of overall cases, has been increasing in the province.

But health officials and experts have cautioned against reading too much into such breakthrough infections, which will continue to happen even as more people are vaccinated, but should remain rare. It’s also not clear what pre-existing conditions the fully vaccinated patient who died at Foothills had, and whether that could have put her at a higher risk of severe illness or limited the effectiveness of the vaccine.

Two units at the Foothills hospital reported outbreaks involving the Delta variant, which was first associated with India, in recent weeks. The outbreak in one unit was declared over last week, with no new cases since May 20, and the other has had just one new case in the past week.

Altogether, 23 people, including 17 patients, tested positive for the Delta variant in the two units. Of those, 11 had been fully vaccinated and nine had a single dose. Three patients have died, two of whom were not immunized.

The Delta variant is believed to be more contagious and reduces the effectiveness of a single dose to an estimated 33 per cent, though two doses are still thought to be very effective.

Alberta has recorded 397 cases of the Delta variant, almost all in Calgary, and recently the variant has accounted for as much as 17 per cent of daily cases.

Kerry Williamson, a spokesperson for Alberta Health Services, said the fully vaccinated woman who died had “significant comorbidities” and was already in hospital when they contracted COVID-19.

Mr. Williamson said in a statement that the outbreak reinforces that vaccines work. Of the 23 people infected, most had mild cases and only two required intensive care.

Stephanie Smith, an infectious-diseases expert and associate professor at the University of Alberta’s medical school, said it’s difficult to assess what happened with the fully vaccinated patient at Foothills without knowing more about why they were in hospital in the first place. She said some conditions can affect the ability of someone’s immune system to mount a strong response to a vaccine.

Dr. Smith noted that the COVID-19 vaccines, while very good, are not 100 per cent effective, which means there will be small numbers of cases in which people who received two doses still get sick. Still, she said, the Foothills case shouldn’t raise any alarms about the overall effectiveness of vaccines.

“When you look at a population level, I think we can still feel quite confident that our vaccines are very effective, even for Delta,” she said.

“But we are going to see this occasionally that we have people who get affected and, rarely, who get severe disease.”

The recent outbreak at Foothills is significantly smaller than one at the hospital last year, when nearly 100 patients, staff and visitors contracted COVID-19 at the facility. That outbreak killed 12 people.

University of Calgary epidemiologist Craig Jenne said vaccines could have prevented the most recent outbreak from becoming worse. He said hospital outbreaks are often significant, with infections climbing above 100 patients and and potentially causing high death tolls.

“Compared to the previous outbreaks, I think we are actually seeing a great deal of protection – but it’s not absolute.” 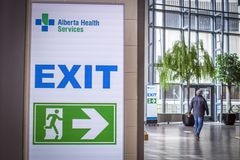 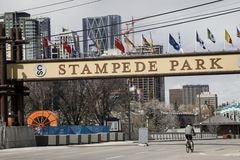 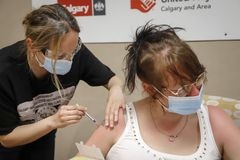