Wildlife experts say the death of a mother grizzly bear and her two cubs – including a rare, blond-headed grizzly – in Banff National Park is a major loss to the population.

Parks Canada has said that an adult bear was struck and killed Sept. 3 by a Canadian Pacific Railway train on a rail line through the Alberta park.

“She was about 10 years old and had been known to Parks Canada,” Dwight Bourdin, resource conservation manager with the agency’s Lake Louise, Yoho and Kootenay field unit, said in an interview this week.

The bear, known as No. 143, spent most of her time in the backcountry of Banff and the adjacent Yoho and Kootenay national parks in British Columbia, Mr. Bourdin said.

She was spotted earlier this summer with two cubs, including the one with a blond head and brown body. But Mr. Bourdin said neither cub has been spotted since before the mother bear was killed.

“One has not been seen since early June and one was not seen since Aug. 15,” Mr. Bourdin said. "Both are believed to have perished prior to this incident.

"We’ve searched the area thoroughly. We continue to monitor the site. We have CP that will report any sightings. But we feel that the cubs did not survive.”

Parks Canada estimates on its website that there are 65 grizzly bears in Banff National Park.

Mr. Bourdin said the two cubs, which are believed to be No. 143′s second set as a mother, were likely killed by a large male grizzly or another predator in the park. It’s not known whether her cubs from 2018 survived, he said.

The portion of the track where the mother bear’s death happened is between Castle Junction and Lake Louise and between the Bow River and a steep embankment.

“There were no grain spills on site and no carcasses on site that would have drawn her to that location,” Mr. Bourdin said. “We believe she was using it as a travel route.”

Officials said an investigation showed there were also strong winds and flowing water at the location so the bear may not have heard the train.

Colleen Cassady St. Clair, a professor of biological sciences at the University of Alberta, led a five-year research project in Banff National Park to find out why so many grizzly bears were dying on the tracks.

Dr. Cassady St. Clair said the location of the latest death holds many of the same characteristics that she and her team found pose a risk to bears.

“Mortalities occurred in the past more frequently where trains were travelling faster, where the track was close to water … and where there was a curvature in the track,” she said. “It’s attractive for bears to travel on the tracks under those circumstances … and it’s hard to get off of the track quickly.”

A paper published the day before the bear strike by one of her team members, Jonathan Backs, showed a warning system with flashing lights and bells could help reduce animal deaths because they would be alerted to oncoming trains and get off the tracks earlier.

Dr. Cassady St. Clair said the death of No. 143, one of the bears in the research study, is disappointing.

“She’s exactly the kind of bear that everyone wants to keep in the population,” she said. "She was a well-behaved backcountry bear, a young mother. It is a big loss for the population.”

Mr. Bourdin said it’s “definitely concerning” to lose a female bear, but that’s why Parks Canada continues to do mitigation work around the tracks to prevent more deaths.

“The research showed there was no single solution, no silver bullet, to the situations there,” he said. “I think it’s a matter of continuing to learn, continuing to do prescribed fire and habitat improvements for the species.”

A statement from CP didn’t address the death, but said it continues to work with Banff National Park to try to reduce the number of grizzly deaths along the tracks. 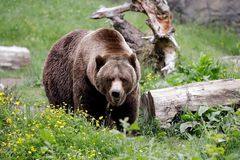