The waiting list for elective surgeries in Alberta has grown by 10 per cent since the medical system focused on containing the novel coronavirus at the expense of addressing other ailments, according to provincial health officials.

Alberta halted elective surgeries March 18, which resulted in a 60-per-cent drop in operations, according to a report from Alberta Health Services’ COVID-19 scientific advisory group. The province delayed between 3,500 and 4,000 scheduled surgeries a week and now 75,000 adults are awaiting operations, up from 68,000 adults prior to the pandemic.

Meanwhile, the number of new cancer cases registered in Alberta plummeted and the frequency of diagnostic imaging dropped this spring, which could translate into a surge of new patients in the coming months, the report warned.

These types of bottlenecks could end up being more costly – and deadly – than the pandemic that created them, the group said.

Alberta, like other jurisdictions in Canada, restricted access to some services such as surgeries and tests to make room in hospitals for an expected crush of COVID-19 patients. But in Alberta, the deluge never came. Now, as AHS lifts restrictions and plans for future waves of the disease, it must create a balance between the services it provides and the need to quickly respond to bursts of COVID-19 cases, the advisory group said.

This echos the call from some of Canada’s top public-health experts, who this week warned politicians that society’s overall health is at risk if the country continues to narrowly focus on eliminating the coronavirus that causes COVID-19.

A prolonged reduction in surgeries is “detrimental and devastating” for patients’ quality of life, morbidity and mortality, the Alberta Health Services (AHS) report said. “This can and will create a potential ‘epidemic within a pandemic,’ and loss of life due to surgical delay may outweigh the consequences of the COVID-19 pandemic.”

AHS removed the report, dated July 7, from its website after The Globe and Mail inquired about its contents. Tom McMillan, a spokesman for Alberta Health, said some of the figures in the report were based on incomplete data and therefore inaccurate. He would not specify which figures were wrong.

Mr. McMillan confirmed there are now 75,000 adults waiting for surgeries, up from 68,000 prior to the pandemic. Alberta’s surgical activity is now just 25 per cent lower than it was prior to COVID-19, and the province plans to eliminate this deficit by September, he said. This is faster than the timeline contained in the advisory group’s document, which suggested Alberta would return to normal operating activity in January, 2021.

This summer, Health Minister Tyler Shandro will announce a plan to increase surgeries beyond Alberta’s pre-COVID-19 activity, Mr. McMillan said. Government officials did not address interview requests for Mr. Shandro. The advisory group’s timeline called for surgical activity to hit 150 per cent of normal activity by next July.

The government this week rolled out legislation that would allow it to more quickly approve private surgical clinics. These clinics performed roughly 15 per cent of surgeries in Alberta last year and the province has pledged to double this by 2023. The public system pays for operations executed at these clinics.

Lesley Barron, a general surgeon in Ontario, said governments should use centralized booking systems, rather than letting individual doctors build up their own waiting lists, to tackle surgical backlogs. Centralized referrals, she said, mean operating rooms can run at greater capacity and put underused surgeons to work.

“Better using the resources that we have is part of the solution,” she said.

Alberta leaned on centralized booking systems for surgeries that could not be delayed during the pandemic – and it paid off, according to the AHS report. The wait time for urgent surgeries improved by 25 per cent after Alberta delayed thousands of scheduled operations, which freed up space in operating rooms. Alberta performed roughly 2,000 emergent and urgent surgeries a week throughout the pandemic, the AHS advisory report said.

Alberta, the report said, should prepare for potential increases in demand for hospital beds stemming from delayed diagnoses of other life-threatening illnesses, such as cancer.

“In Alberta, the mortality burden of cancer and increased hospitalization with delayed diagnosis and treatment is anticipated to outweigh that observed for COVID-19,” the report said. 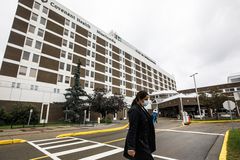 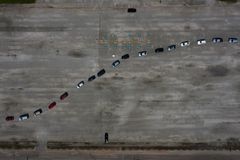