When farmer Lynn Grant looks over his land just 30 kilometres from the U.S. border in Val Marie, Sask., he sees a panorama of dried-up grass, and “not much of it.”

Finding fall and winter feed for his 1,000 cows will be a challenge, and many of his cattle-producing neighbours face the same problem. “Eighty to 90 per cent of this year’s growth did not get any higher than last year’s stubble,” Mr. Grant said of his hay fields.

In a world scorched by high temperatures, Canada’s Western provinces – home to more than 80 per cent of Canada’s farmable lands – have been the country’s hot spot this week. On Friday, the forecast highs in Medicine Hat, Alta. and Medina, Saudi Arabia, were both in the low 40s. 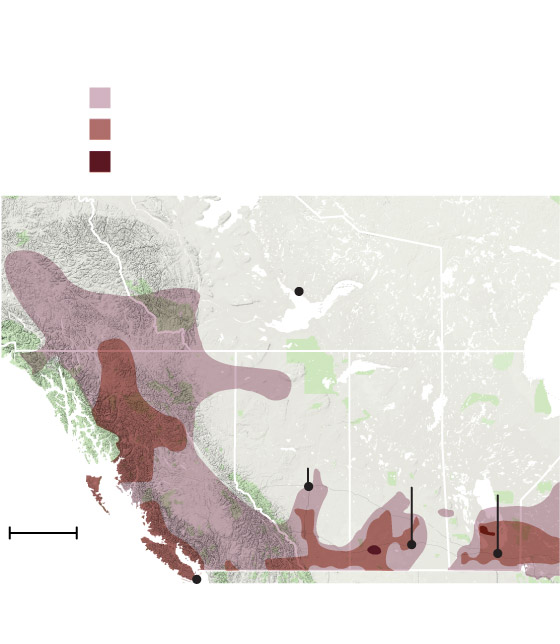 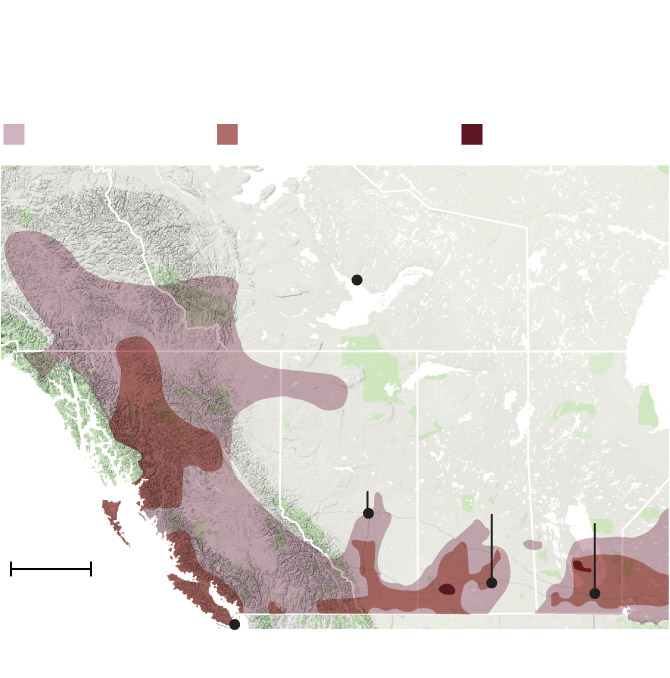 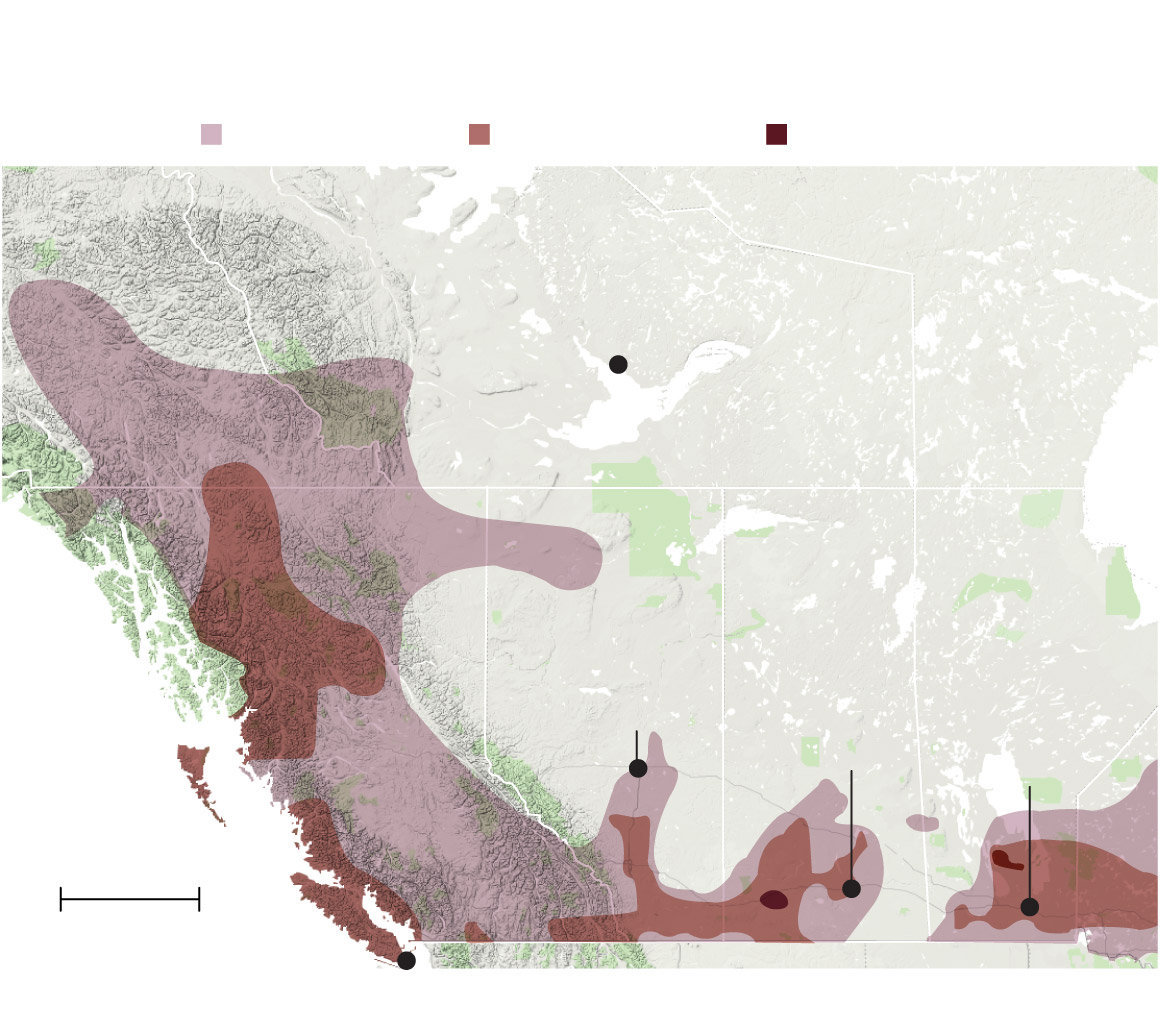 Weeks of hot weather across the Prairies and in British Columbia, combined with a lack of rain in some areas, are hitting many agricultural producers and creating long-term worries about how parched future years will be. Warmer temperatures mean even when the rains come, evaporation can wick much of the moisture away.

At this point in the year, affordable feed for livestock is the main concern. Cattle producers and dairy farmers, from Vancouver Island to the Interlake region of Manitoba, point to dwindling stocks of hay and grain for their herds. Farmers usually need to source feed themselves or nearby for it to make economic sense, and this year many producers will have to sell off significant portions of their herds far earlier than normal. Extended heat also stresses cattle: It can affect their ability to gain weight and reduce milk production in dairy herds.

The same dry story does not apply across the board – there is a patchwork of conditions across the West. In some areas, sporadic rains and thunderstorms have given the land what it needs to support crop growth. But as Patrick Cherneski, manager of the country’s National Agroclimate Information Service, said: “A general rule of thumb is temperatures above 30 C start to adversely affect plant growth.”

There are big swaths of distress. For instance, the lands between Lake Manitoba and Lake Winnipeg have suffered extended periods of drought conditions, as well as other parts of Manitoba. Tom Teichroeb, interim president of the Manitoba Beef Producers, said this kind of weather sets off a vicious cycle: It drives up commodity prices for livestock feed and drives down the value of animals. And when times are good again, producers have to buy in during a period of high prices.

A deadly tornado that touched down earlier this month just north of Mr. Teichroeb’s Langruth-area farm didn’t even bring any precipitation.

“There are folks up there that are talking about liquidating, simply because there is no feed available to them,” he said. “The right word is pathetic.”

In Saskatchewan, the Ministry of Agriculture says many parts of the southwest, south-central and even the west-central regions of the province haven’t received any significant rain since June. Shannon Friesen, a Moose Jaw-based crops extension specialist, said in some areas fields have not received more than two inches of rain for months. Provincewide, hay yields that usually feed livestock are 10- to 75-per-cent less than typically expected.

Last year was also extremely dry, Ms. Friesen added, but there was then a healthy store of subsoil moisture. And the rainfall that sometimes comes in July – that has often “rescued” farmers in other dry years – didn’t materialize in 2018, she said.

“If we do not see significant moisture this fall, or a lot of snowfall this winter or early next spring, things could worsen for us," she said.

In Alberta, the Agriculture and Forestry department says that several lands across southern Alberta have seen less than 10 millimetres of rain since July 15 – far less than is needed to sustain a crop. In many parts of the southern province, moisture accumulation for the past three months is the lowest rainfall level in as long as 25 years. In a few pockets, there are 50-year lows.

In many respects, the strategy is now about adaptation. Many farmers don’t necessarily use the phrase “climate change,” or regularly talk about man-made carbon emissions raising the Earth’s temperature. But they do talk about it getting hotter and drier.

On Vancouver Island, Brian Geiger – secretary for the Comox Valley Farmers’ Institute – said the past 10 years have been the hottest he’s experienced in his four decades on the island. Mr. Geiger, a former dairy farmer who now grows hay crops, said any feed that can’t be sourced locally because of the dry conditions this summer will have to be brought in from the mainland at great cost. Longer-term, there is talk of the regional district building irrigation systems, and farmers themselves are digging lagoons to store the winter water for summer.

Likewise in Saskatchewan, Mr. Grant said he and other farmers are looking at storing much larger grass feed caches – a huge drag on their yearly incomes – to ensure they can feed their cattle in times of drought.

“You have to remember the name of the game is survival.”