As the first Treaty First Nation person to receive a law degree from the University of Alberta, Wilton Littlechild requested – and received – special permission to swear the oath required of new lawyers with a sacred eagle feather.

Almost 42 years later, the Treaty Six Grand Chief found himself holding back tears during a ceremony making eagle feathers an option for swearing oaths in all Alberta courts.

“I felt very emotional because I saw an acceptance of our spiritual and cultural beliefs in a judicial proceeding in the Canadian justice system,” Mr. Littlechild said after the ceremony in Edmonton.

Until last week, individuals making an oath in civil, criminal or family matters in Alberta could swear only on a religious text or make a non-religious affirmation. In court, witnesses were commonly offered the Bible or the choice of affirmation before their testimony.

Eagle feathers will now be available in all proceedings as a traditional Indigenous form of conscience binding.

“It’s a very serious individual undertaking of honesty, which I think benefits the courts, of course, when we follow those traditional laws,” Mr. Littlechild said. “And it’s very meaningful to us to feel included.”

Alberta Justice and Solicitor-General spokesman Teigan Lawton says discussions around the broader availability and use of eagle feathers in court began in early 2018 as a joint effort between the three levels of court in Alberta. The move followed similar initiatives in Manitoba and Nova Scotia.

Mr. Lawton says eagle feathers have already been in some courtrooms for several months, in places where feathers were donated to the courts by area First Nations. The feathers are now available around the province, after a large donation of eagle feathers by Provincial Court Justice Ivan Ladouceur and some additional feathers from Alberta Environment and Parks.

Mr. Lawton said there are currently 122 eagle feathers, with at least one in every court location. (Some courthouses have multiple feathers.) Mr. Lawton says the eventual goal is having an eagle feather available in each individual courtroom.

“You know my biggest hope and dream for this project would be that it has the substantial impact that the courts in our division sought out for it to have,” Mr. Lawton said. “So that people are utilizing the feathers and that it bridges that gap to reconciliation and that people are feeling the justice system is making these important steps.”

Mr. Lawton said the eagle feathers were each blessed by the beader who beaded the stems, and individual nations can have their own ceremonies for feathers that will be used in the courts in their area. He said community members in Maskwacis have already held a ceremony to bless their feathers and bring them into court, and a ceremony is planned for the Siksika Nation next summer.

Mr. Lawton, a member of the Sturgeon Lake First Nation, said he hopes to see the use of eagle feathers expand to courts across the country.

“For me personally, this is an important step where an Indigenous person and a variety of other Indigenous stakeholders had an opportunity to make a meaningful change within the justice system,” he said.

Chief Justice Catherine Fraser says she hopes the presence and use of the sacred eagle feather “demonstrates the court’s commitment to ensuring that the justice system is open to and respectful of aboriginal culture.”

“It represents one step – an important one, but only one – in implementing the Truth and Reconciliation Commission’s calls to action,” she said. “But reconciliation calls for more than just this.”

Grand Chief Littlechild, who chaired the Commission on First Nations and Métis Peoples and Justice Reform in Saskatchewan from 2001-04, says he believes respecting the traditional form of conscience will have broader effects in the administration of justice and in improving relationships between Indigenous and non-Indigenous people.

“It means a lot to us from a cultural and spiritual, traditional, perspective,” he said, adding that he hopes the eagle feather will be available to non-Indigenous people as well, if they choose.

“I think the positive impact will unfold in the future in that way that when we look back three, four or five years from now, that it would have been a significant advancement towards reconciliation.”

An eagle feather has already been used in at least one trial in Edmonton. The same day as the ceremony, a witness who had been sworn in the previous week swore a new oath with a feather.

Oaths on eagle feathers to be allowed in Manitoba RCMP detachments
January 22, 2019 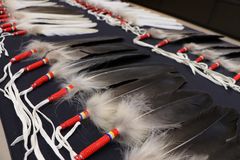 Nova Scotia RCMP first in Canada to offer eagle feathers for swearing oaths
October 30, 2017
Follow Jana G. Pruden on Twitter @jana_pruden
Report an error Editorial code of conduct
Due to technical reasons, we have temporarily removed commenting from our articles. We hope to have this fixed soon. Thank you for your patience. If you are looking to give feedback on our new site, please send it along to feedback@globeandmail.com. If you want to write a letter to the editor, please forward to letters@globeandmail.com.
Comments