Alberta’s two largest cities have opened homeless shelters in their main convention centres, as they attempt to house their most vulnerable populations during the COVID-19 pandemic while keeping people at a safe distance to prevent outbreaks.

Calgary’s Telus Convention Centre started a trial run over the weekend, providing food and around-the-clock shelter for 50 people as it prepares to add another 250 people in the coming week. In Edmonton, the Expo Centre was transformed into an overflow shelter two weeks ago.

The new spaces are opening as provincial and local governments across the country work to prevent outbreaks in crowded homeless shelters, where it can be difficult for residents to follow public-health advice of staying two metres apart. In Toronto, the city is leasing hotel rooms while Vancouver is relying on its existing network of shelters.

"I believe an outbreak within the homeless population is among our greatest public-health risks and we need to get it right and do right by people,” Calgary Mayor Naheed Nenshi said in a statement.

Mr. Nenshi has joined others in calling for hotel rooms to house the homeless population rather than mass shelters, but he said he accepts the province’s decision to rely on the convention centres.

The provincial government has pledged $25-million for new shelter space, rapid rehousing and a spread of other supports for those experiencing homelessness during the pandemic. That money is part of $60-million in emergency social services announced in March, which is also going to front-line service providers and women’s shelters.

Homeless shelters are exempt from some of the physical distancing rules imposed by the province last month, allowing them to operate with more than 15 people in a space. The required space between beds was also reduced to one metre rather than two metres.

Still, those physical distancing measures have restricted the amount of people staying in the shelters at one time. Calgary announced last month that it was shrinking the total number of shelter spaces by 400.

The Calgary Drop-In Centre, a large downtown shelter, cut its capacity in half, housing 300 people, down from about 630 before the pandemic, said executive director Sandra Clarkson. The Drop-In Centre is in charge of operations at the new convention centre site.

Marie Renaud, the NDP critic for community and social services, felt there were better options than convention centres.

“Certainly it’s better to be there than outside in the cold, but I think in a province like Alberta, in a country like Canada, we can do better for our people than putting hundreds of people together in a mass,” she said, pointing at Edmonton’s Expo Centre, which was transformed into an overflow shelter on Mar. 23.

Brian Wolfe, an Edmonton man who is experiencing housing instability, said he has stayed away from the Expo, concerned about the novel coronavirus that causes COVID-19 disease and other illnesses.

“If we were supposed to stay away from each other, why are [they] grouping together hundreds of people?” Mr. Wolfe asked.

"We did not have 10 days or two weeks to wait for hotels to get ready to be able to accept this very heterogeneous population of homeless Albertans, we needed to move quickly and the Telus Convention Centre came together in two days,” Ms. Sawhney said, saying that repurposing hotels adds to insurance and liability issues.

Jackie Foord, the branch manager of social development for Edmonton, said there is no perfect universal solution in the unprecedented situation. “We couldn’t follow, more stringently, the advice of Alberta health services. We want everybody to be safe,” Ms. Foord said.

The centre is open for day drop-in and has separate spaces built as isolation shelters for people with symptoms or who have tested positive for the virus to stay indefinitely. The 500,000-square-foot facility hasn’t reached capacity, but Edmonton Mayor Don Iveson said during a press conference last Thursday that, if needed, there are other facilities that could be looked to for further overflow.

The province said it’s also taking this time to consider housing after the pandemic. The Drop-In Centre said it has a team working specifically on finding homes for the 300 people staying in the convention centre.

“It’s a lofty goal, let me tell you, but it’s something that we’re really focused on is looking for long-term solutions out of this pandemic response and not just getting people sheltered in the interim and then back to the shelter,” Ms. Clarkson said.

Alberta has suspended eviction for missed rent payments before May 1, easing the stress on vulnerable citizens, but housing and food are still the most searched topics during the pandemic, according to data from HelpSeeker, a help navigation application for social and community support.

Information about COVID-19 was the largest single topic searched for on the site, which had 45,000 visitors looking for information.

Alina Turner, chief executive officer of HelpSeeker and a fellow at the school of public policy at the University of Calgary, said shelter is a basic need for Canada’s entire population, not just those experiencing homelessness, but given the circumstances the province is leading the pack.

“I would say Alberta is doing really well compared to other jurisdictions. … Some of them are still scrambling to come up with the primary shelter response and aren’t necessarily on this other, more longer-term, solution,” Dr. Turner said. 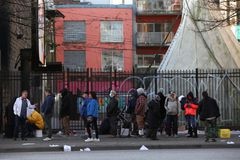 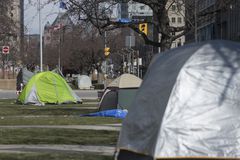