Edmonton Oilers fans are locked out of the arena, but they’re setting records with 50/50 draws whose jackpots soar into the millions of dollars on game nights.

The nightly charity draws, which award half the ticket proceeds to the Edmonton Oilers Community Foundation and the other half to the holder of the winning ticket, moved online as the Stanley Cup qualifiers began, without live audiences, in the hub cities of Edmonton and Toronto.

The Oilers’ 50/50 draw during its qualifying round against Chicago has sold a record $9.4-million worth of tickets in just three games, including $5.4-million on Wednesday, with half of that money paid out in jackpots.

“We had no idea we’d be playing hockey again this year,” foundation chair Janet Riopel said during a news conference on Thursday.

“With all the challenges we faced because of COVID-19 descending on us, we were really worried as a foundation because we’re reliant on those funds from the 50/50 to support the endeavours that this community desperately needs.”

The resumption of the 50/50 draws is one of the few ways the National Hockey League teams can recreate at least a small part of the arena experience for fans watching in bars, backyards and living rooms.

Ticket sales, and jackpots, have quickly ballooned. The Oilers stopped sales eight hours early on Wednesday afternoon after bringing in $5,417,130. Ticket prices range from $5 for a single ticket to $50 for 200.

The Edmonton Oilers Community Foundation uses its share of the proceeds to fund local programs and non-profits. The organization has donated more than $40-million to more than 2,900 charities and hockey programs in Alberta since 2001.

Typically a 50/50 draw at a hockey game will attract as much as $100,000, according to Ascend Fundraising Solutions, which operates charitable fundraising technology for in-arena and online contests for teams in the NHL, National Football League, National Basketball Association and other leagues in North America.

Toronto Raptors fans set the previous record when the 50/50 draw hit $2-million during the 2019 NBA final, when the team won the championship, according to Ascend.

“It’s a staggering sum,” said chief executive officer Daniel Lewis. “There is no precedent in history of someone doing a private, charitable raffle that sells $5-million online in a single day. It’s an outrageous event.”

Similar draws held by other NHL teams have also seen sales increase, though not to the same degree.

Fans of other teams are also raising more money through raffles than they were during in-arena contests. The Boston Red Sox opening game raised approximately $120,000 during its raffle – whereas the typical in-stadium game garners about $30,000 – and the Chicago White Sox home opener raised more than $150,000, Mr. Lewis said. But still, he added, “there’s nothing like Edmonton right now.”

In the spring, Alberta Gaming, Liquor and Cannabis eased its rules around online sales, allowing more flexibility to host 50/50 draws within Alberta. Ascend is increasing its capacity for coming games to allow for more tickets to be sold without compromising its software capabilities that manage the game.

The hoopla over a routine 50/50 draw in Edmonton is the result of a variety of factors all converging at once, according to Moshe Lander, a sports economist at Concordia University in Montreal. During times of tragedy or strife, people are more inclined to give to charitable causes. Edmonton also scored one of two coveted hub city designations for the NHL’s resumption, and Oilers fans feel particularly connected to the familiar Rogers Place arena after months away.

And behind it all is Edmonton’s unwavering pride for its hockey team, unlike it’s co-hub city Toronto where allegiances are spread across several leagues, he said.

“Thousands of fans want to get together and watch hockey in a public space and we can’t, so this is a way that we can engage with each other,” Mr. Lander said.

“Other teams don’t nearly have the hearts and minds in Edmonton the way that the Oilers do. When you drive up the highway from Calgary to Edmonton, just inside the city limits is a big statue of the Stanley Cup. That city really associates itself with the hockey team, so that chance to be charitable within the hockey team is the perfect confluence of events.” 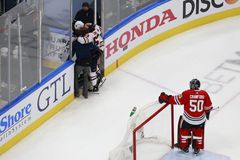 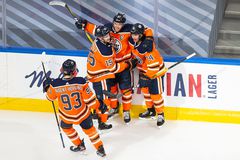 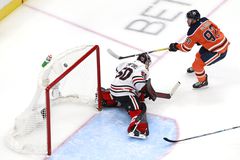