A group of young volunteers have been taking turns to monitor the grounds of an Edmonton mosque that was vandalized with a swastika symbol.

“There’s a few things that go through every Muslim’s mind right now, especially in the wake of the attack which took place in London, Ont., on an innocent family,” said Safwan Choudhry, a spokesman for the Baitul Hadi Mosque.

He said in an interview Wednesday that young community members have been taking turns to patrol the mosque 24 hours a day and seven days a week.

A community member reported Tuesday morning that someone spray-painted the large, red symbol on the roof of the Baitul Hadi Mosque, near the minaret, police said in a statement.

They said investigators believe the vandalism may have happened in April – at the same time a vehicle and fence were vandalized in a neighbourhood near the city’s downtown.

The same person may be behind all the acts of vandalism, police said.

But Choudhry said a community member only discovered the vandalism Tuesday.

“And also, as you may imagine, it’s been almost 24 hours and we’re evaluating all (other) security options.”

He adds there was no security camera pointing to that area of the mosque, so someone had to have climbed the building with a ladder or with support from another person to get to the roof of the building.

Imam Nasir Butt of the Baitul Hadi Mosque said the community is still grieving after a Muslim family in London, Ont., was run over by a vehicle earlier this month. Four members of the family died, but a nine-year-old boy was recently released from hospital.

“We are deeply disturbed by the rising acts of violence against the Muslim community,” Butt said.

“This is not the way of Canadians, and we must work together to combat anti-Muslim sentiment.”

The mosque also said in a statement that the vandalism follows a report of threats made against an Ontario mosque on the same day the swastika was called in.

The threats included bomb threats against the Toronto institution, the council said.

“We are extremely concerned and saddened that this incident took place in our beautiful place of worship,” said Fareed Amin, chair of the institute’s board of directors.

“No community, or any place of worship, should be subjected to such threats and heightened anxiety.”

Two people charged after allegedly threatening to ‘blow up’ east-end Toronto mosque
June 16, 2021
Opinion
The London attack highlights the urgent need for Canadians to reach out beyond their own communities
June 15, 2021 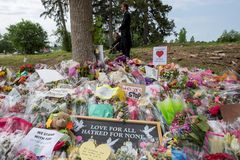 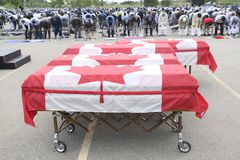