Invasive-species experts are preparing for the possibility that insects dubbed “murder hornets,” which have been found in British Columbia, could spread elsewhere in the country, endangering people and honeybees, though they say the risk still appears low.

Asian giant hornets were discovered last fall on Vancouver Island, near Nanaimo, where local beekeepers tracked down and destroyed the nest. The hornets were sighted last year in Washington state, where entomologists are working to wipe them out.

The experts and the B.C. Agriculture Ministry are not sure if there are any other Asian giant hornets in the province or if they will emerge again this spring and summer. The hornets are roughly thumb-sized and have a potent venomous sting that, in large enough numbers, can seriously injure or kill a person. Provincial apiculturists are also watching for any signs that the insects could spread east, first to neighbouring Alberta, which has 40 per cent of Canada’s honeybees.

British Columbia’s chief beekeeper said he believes his province is prepared to respond if the insects return.

Paul van Westendorp said the hornet’s success “is not guaranteed at all because you will have a natural rate of mortality.”

“These hornets are not expected to be overriding the countryside whatsoever," he said.

“And I’m pretty confident that they will find ways of perhaps not eliminating but then largely mitigating the impact hornets may have on their bees.”

In Alberta, acting provincial apiculturist Samantha Muirhead said she’s not taking any chances, even if the risk of Asian giant hornets invading is low.

She said detailed risk assessments are being conducted throughout the province.

“You just always have to err on the side of caution with insects,” Ms. Muirhead said. “They have such a high reproduction rate.”

Ms. Muirhead said that “accidental introductions” such as the Asian giant hornet were common and could have a serious impact if left unchecked.

Gard Otis, who studies apiculture and behavioural ecology at the University of Guelph, said domestic beehives are the hornets’ favourite feeding grounds.

“They attack … they just kill them all,” Dr. Otis said. “Once the hive is dead and the colonies are dead, then they move in."

The dense concentration of hives at commercial apiaries could pose a risk, Dr. Otis said. Fortunately, the bulk of Canadian honey comes from the Prairies, where it is unlikely the forest-dwelling Asian giant hornets will seek to establish themselves.

When the Asian giant hornets arrived on Vancouver Island, no one knew how they got there.

The hornets found in North America, known as Vespa mandarinia, differ slightly from those found in Europe, so it’s difficult to project their impact on North American ecosystems or if they will establish colonies.

At this time in the year, the queens emerge from underground nests to feed occasionally, making them hard to notice. If they successfully produce offspring, it may not be obvious until July, when the adult worker hornets will emerge in swarms looking for food sources.

It is also not clear if the Asian giant hornets here will survive long enough to establish colonies. If they do, the Asian giant hornets are considered apex predators and can decimate bee populations, which would have a devastating effect on local ecosystems and apiaries. And while they live in the woods and often would not encounter people, they are aggressively defensive in protecting their territory.

“It’s an apex predator and preys on such a vital organism,” Ms. Wallin said.

“When you haven’t had it here, you can’t totally document, you can only project what the impact will be.”

Dan Kraus, national conservation biologist at the Nature Conservancy of Canada, said the public concern about the invasive species was a welcome surprise. “We should maybe add ‘murder’ to the name of all our invasive species, then they’d also get a lot of attention.”

“You know, invasive species are spreading quickly in our modern world but so is information,” Mr. Kraus said, “and that may be our best defence.” 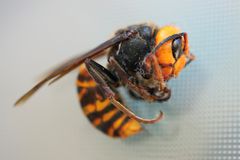