It is so cold in Calgary that the zoo’s penguins cannot go outside. It is so cold in Edmonton that an ice castle attraction is closed until at least Saturday. It is so cold in Saskatoon that a local yarn shop reported a 30-per-cent increase in sales as knitters prepared for a long stretch inside. In Vancouver, a city unaccustomed to the worst of winter’s weather, buses are getting stuck in the snow and commuters are pushing them out. The city’s SkyTrain doors are freezing shut.

Alberta is drawing on its power reserves and Saskatchewan cannot export power to help its western neighbour because of its own electricity crunch. In British Columbia, scores of ferry routes have been cancelled because of “forecasted hurricane-force winds,” according to the service.

Environment Canada has issued “extreme cold” warnings for every region of Alberta and Saskatchewan as an extended cold snap hovers over Western Canada. Swaths of British Columbia are facing a more diverse list of warnings, including extreme cold, Arctic outflow, wind and snowfall alerts. The cold is putting pressure on transit networks, power grids and homeless shelters.

The Calgary Zoo’s king penguins were scheduled to make their first outdoor stroll of 2020 on Monday, but animal keepers cancelled it because it was too cold. The same thing happened Tuesday and Wednesday. It was warmer in Antarctica than Calgary on Wednesday. The zoo will not let the waddlers, which are native to sub-Antarctica, outside when it is cooler than -25 C.

“They don’t have coats, but we do, so no excuses," the zoo said on Twitter.

Environment Canada expects Calgary to hit a high of -27 Thursday. Just a few minutes of exposure will result in frostbite. Calgary Drop-In Centre issued a plea for winter gear earlier this week and the Calgary Flames Foundation donated $5,000 worth of boots, coats and other necessities, the emergency shelter tweeted. A Canadian clothing company that donates 10 per cent of its profit to charity on Wednesday delivered 500 tuques, 200 pairs of socks, 50 towels and 50 bottles of shampoo to the Drop-In Centre, according to Local Laundry co-owner Dustin Paisley.

Alpha House, one of the city’s shelters, said individuals have also stepped up with donations. “They are being used as soon as they come in," said Shaundra Bruvall, a spokeswoman for the shelter.

In Calgary, firefighters responded to a house fire after someone used an open flame to thaw frozen pipes.

The Vancouver region’s transit authority, known as TransLink, advised commuters to stay home Wednesday. It said that both bus and SkyTrain operations were “significantly impacted” because of inclement weather with many bus stops closed and routes cancelled.

Meanwhile, schools in Vancouver and on Vancouver Island cancelled classes Wednesday. But children were not the only ones free on a snow day. Classes at the University of British Columbia, Simon Fraser University and University of Victoria were nixed, too.

While snow is the main culprit in B.C., the cold temperatures are behind problems in Alberta and Saskatchewan. Power demand across Alberta set a peak consumption record Tuesday, with residents burning through 11,698 megawatts, besting the previous record set in 2018 by one megawatt, the province’s energy authority said in a tweet.

Alberta dipped into its electricity reserves and the Alberta Electric System Operator activated its energy emergency alert protocol, a three-tier system that balances supply and demand, on Monday.

Alberta would usually look east to Saskatchewan to help cover the shortfall, AESO spokesperson Tara de Weerd said. But with the deep freeze in that province also generating near-record power demand, Alberta instead relied on imports from B.C. and Montana.

Knitters and their crocheting kin are among the best prepared for cold snaps, which often prompt sales of supplies to spike. In Saskatoon, The Wool Emporium’s sales jumped about 30 per cent ahead of the cold snap, according to Glenda Hudson, the shop’s owner. Sales at Calgary’s The Loop Kensington climbed by about 50 per cent in the days before the cold moved in.

“When the weatherman says it is getting super cold, it is like, look out,” Annie Ritter, the Loop’s co-owner, said. 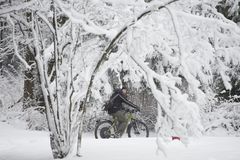 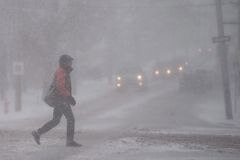 Follow Carrie Tait, Emma Graney and Xiao Xu on Twitter @CarrieTait @EmmaLGraney @xiaoxuyvr
Report an error Editorial code of conduct
Due to technical reasons, we have temporarily removed commenting from our articles. We hope to have this fixed soon. Thank you for your patience. If you are looking to give feedback on our new site, please send it along to feedback@globeandmail.com. If you want to write a letter to the editor, please forward to letters@globeandmail.com.
Comments