Kim Prodaniuk didn’t plan to be a crusader for change but hopes her lawsuit against the Calgary Police Service alleging harassment and emotional distress will make a difference.

The 40-year-old officer joined the service in 2008 and left on stress leave in 2017. She joined other female officers who publicly alleged that the force failed to provide a safe environment against bullying and harassment.

Ms. Prodaniuk, who filed a statement of claim against the police chief’s office, the Calgary Police Association and the City of Calgary in March, recently added a 132-page affidavit with details about her time on the force.

“I see myself as a change agent. I’ve been standing up since 2017 about systemic issues in policing, police brutality, abuse of authority,” Ms. Prodaniuk said in an interview with The Canadian Press at her home in Springbank, Alta.

Ms. Prodaniuk said the death of George Floyd, a Black man who protested he couldn’t breathe while a Minneapolis police officer pressed a knee into his neck for nearly eight minutes, is the catalyst for the change she’s talking about.

“This is the opportunity to fix it. Good cops don’t have the right to remain silent about this any more.”

Protests over Mr. Floyd’s death across the United States, Canada and internationally are demanding an end to systemic racism and police brutality.

“It’s horrific, absolutely horrific, that we’re still dealing with this kind of thing in 2020,” Ms. Prodaniuk said as she wiped away tears.

“The things we see on video that happened are real and these can’t be reduced any more by the police.”

In her affidavit, Ms. Prodaniuk alleges multiple encounters involving sexual harassment and intimidation. She describes one case involving an officer who she says told her about his domestic situation and that he was having visions of killing his girlfriend.

“He told me if I told anyone what he’d said he would make up rumours of a sexual nature about me and spread them around the CPS,” she wrote.

“Never in my wildest dreams could I imagine as a police officer I would be in a situation where reporting danger to my police employer could result in consequences to my career and reputation.”

Ms. Prodaniuk also alleges that when she was training to work undercover she was ordered to fake an orgasm while riding a carousel at a shopping mall and to make sexually explicit phone calls to audition for an imaginary phone sex line that the male officers shared among themselves.

“I could either fail the scenario, which would potentially end my ability to do undercover work in the CPS, or follow through … What the CPS was asking me to do crossed my moral and ethical boundaries,” she wrote.

“In reality, it was a one-week long course dedicated to entertaining male CPS officers at the expense of female officers’ sexual dignity.”

The police service has not filed a statement of defence, but has entered a motion to strike the lawsuit. It says the collective agreement covering officers requires grievances to be filed within 60 days.

Chief Mark Neufeld said he has read the affidavit.

“I’m not going to talk to you about this particular case because it is before the courts,” he said.

“What I will say is those allegations that I read in that statement of claim were repugnant. I’m very concerned about those types of things, and every person deserves a respectful workplace and to be safe in their workplace.” 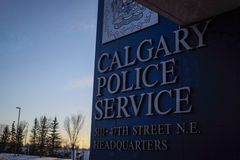