Alberta’s largest city and the Calgary Flames have sealed agreements to roughly split the cost of building a new multimillion-dollar arena, a commitment that comes as municipal politicians are raising local taxes and struggling to find enough money to maintain services such as community pools and policing.

Calgary and the Flames’ owners – a group led by billionaire Murray Edwards – have spent years negotiating for a facility that would replace the Saddledome. The proposed arena, according to the city, will cost $550-million and the two sides are to split the cost. However, Calgary expects to spend roughly $290.4-million in the deal as it assumes most of the burden to demolish the Saddledome.

Calgary is in the midst of a budget crisis, and has spent months debating and rejigging its budget. The city, for example, just raised property taxes and siphoned $24-million from its rainy day fund, but will still lay off municipal employees and reduce services. Calgary and the Flames’ owners have spent years negotiating – often in public and acrimoniously – over a new arena and the timing of the deal further fuelled tension at city hall.

The arena and accompanying facilities have long been at the centre of the debate over how to make Calgary a better city. The value of spending millions on an area is frequently weighed against the potential benefits of expanding Calgary’s transit, a multibillion-dollar effort now in financial jeopardy.

Jeff Davison, who was elected to council in 2017 as previous negotiations between Calgary and the Flames imploded, is among those who champion the arena deal.

“There’s no takesie-backsies,” he said. “This is making history for our city. This will be a transformative project for the city. It will have meaning and impact to all citizens for decades and decades to come.”

Calgary’s budget has been shrinking after revenue generated from property taxes in the city’s downtown core plummeted as the economy slipped – and stayed – in the gutter. The crunch was exacerbated in October, when the provincial government increased its take of property taxes generated in Calgary at the expense of the city.

Alberta also increased its share of revenue from fines collected by the Calgary Police Service, again to the determent of the municipal budget. The government, led by the United Conservative Party, also trimmed funding for the Green Line, which is the city’s massive transit expansion effort, and rewrote the way municipalities, particularly Calgary and Edmonton, will be funded in the future. The UCP accuses Calgary’s council, particularly Mayor Naheed Nenshi, of overspending and authoring the city’s financial woes.

Calgary will draw on the rainy day fund to pay for the arena.

The proposed arena project is more than a hockey facility. Proponents argue it will help revitalize Calgary’s Victoria Park area. Development is part of the deal between the city and Calgary Sports and Entertainment Corp., the entity that controls the Flames. The agreement gives CSEC options to acquire land in the neighbourhood.

Mr. Edwards declined to comment. Ken King, the vice-chairman of CSEC, did not return a message seeking comment. The Saddledome is 36 years old and was built for the 1988 Winter Olympics. Last year, Calgarians in a plebiscite voted against bidding for the 2026 Games.

Druh Farrell, a city councillor who represents a ward next to the arena’s turf, has long opposed arena funding proposals. She does not believe projected financial benefits for the city will materialize.

“Calgarians should be paying for projects that deliver a public good," she said. “This is a for-profit project that could have been easily funded by owners.” 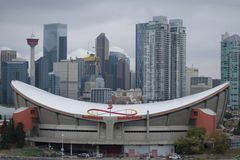 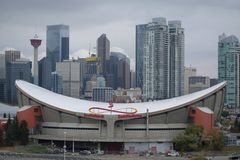 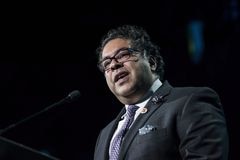