They can’t be seen by the public, not for another month at least. But the giant pandas of China have pulled into Calgary like rock stars on their biggest tour, like headliners at a panda-palooza.

Pampered? The pandas blew into Calgary from Toronto last Friday on a private charter with their handlers and personal physician.

Popular? The Calgary Zoo is expecting a 1.6-million boost in attendance this year, with an economic impact of $18-million.

Protected? The fab four – adults Er Shun and Da Mao and twin cubs Jia Panpan and Jia Yueyue – will remain in quarantine until May 7, when an adoring public will finally get to watch them do what they do best – eat, sleep, roll around, eat some more. As much as 38 kilograms of bamboo per bear per day, all of it flown in fresh from Beijing.

It is part of a 10-year, $10-million agreement with the Chinese government. Toronto got the pandas for the first five years. The cubs were born there in October, 2015, and given their names, Canadian Hope for Panpan and Canadian Joy for Yueyue. Calgary gets the final five years, with the cubs jetting off to Hong Kong after 1½ years to become part of China’s panda breeding program.

Confirming all is well to this point is one of the few people who worked with the pandas before they arrived at the Calgary Zoo in trucks emblazoned with their images. Cissy Kou is the Hong Kong-born, Calgary-raised animal lover who walked into the zoo office and asked if anyone was interested in her unique skill set. Ms. Kou had recently returned to Calgary after working at Hong Kong’s Ocean Park, where she started as a bird trainer with a degree in psychology. She had wanted to train dolphins, but her vision was too weak, and she was not allowed to wear contacts for safety reasons. Given a chance to care for the park’s pandas and study their habits, she quickly became something of a panda whisperer.

After getting the job with Calgary Zoo last year, she spent a couple of weeks getting to know the pandas in Toronto. The bears, she reports happily, are relaxing as hoped for in their new $14-million indoor/outdoor habitat complete with 1,950 square metres of space.

“A lot of people asked, ‘Are you excited? Are you ready?’”Ms. Kou says. “The truth? I was not so excited yet because the bamboo supply is different from the Toronto Zoo and bamboo is their main food. So we were worried they won’t like the bamboo here. But so far, so good. So now I’m excited.”

That excitement peaked last week after the move was done, when Da Mao, the adult male, lumbered out of his transport cage, sat down in his new domain and promptly began eating.

“It was electric,” Matt Korhonen, the curator of the zoo’s Eurasian exhibit, says of that moment. “I think by the time we were done, we were just exhausted. There were so many small details involved in getting them here that there were big bags under our eyes. Everyone high-fived and hugged and said, ‘I’m going home to bed.’”

Calgary has hosted pandas before – for much of 1988, when 1.3 million people passed through the zoo gates. That gave Chinese officials a measure of comfort knowing the zoo could handle the bears safely. But not everyone shared that conviction. Beyond the argument that animals should not be sequestered for our viewing entertainment has been the Calgary Zoo’s spate of deaths. The casualty list includes significant numbers of stingrays and penguins, bats and gorillas. A capybara was crushed by a hydraulic door; a goat strangled itself in a rope accident.

In some cases, procedures were changed; in others, workers were disciplined. Zoo officials are not obliged to make the deaths public, but decided it was better to be open about it, a spokesperson says.

“There are always people who are not for zoos, who don’t take the time to understand our relevance now,” says Trish Exton-Parder, the zoo’s media relations leader. “We made a decision to be transparent for animals and humans because the circle of life is going to happen. It doesn’t mean that since you’re in captivity you’re immortal. This is what it’s like when you work at a zoo.”

The Calgary Zoo has been praised for its breeding programs and conservation efforts involving whooping cranes and burrowing owls. Both species have been reintroduced to the wild. “Pandas lay out this wonderful platform to start the conversation about [animal conservation],” Ms. Exton-Parder adds. “Look at what’s happening every day on the planet. [Losing] a couple of species a day is pretty pathetic.”

Panda conservation is doing its job. The species’ status has been downgraded from endangered to vulnerable. Only slightly more than 1,860 pandas are left, but that is an increase.

In Calgary, the giant pandas of China have five staff workers assigned to their well-being and are fed four times a day. While the pandas look alike, their eye markings and their attitudes show subtle differences. The cubs have been tentative in their new environment, even with their mother Er Shun there, while Da Mao is separated from the other three and apparently okay with that.

“Each panda has their personality, their character,” Ms. Kou says, pointing out that pandas are solitary by nature. “Knowing that [makes] it easier for training and daily care. Sometimes they can be more sensitive to sound or smell. Knowing that, it helps a lot with commands for training.”

Asked what her hopes are for the bears, especially Er Shun, a smiling Ms. Kou answers: “Triplets.” 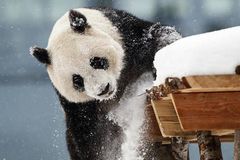 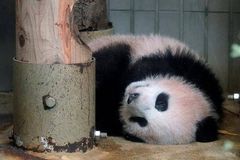 What happens next for the Toronto Zoo after it says goodbye to the giant pandas
November 12, 2017 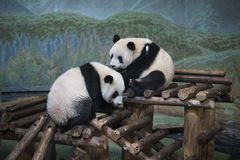