Hundreds of health care workers and support staff in Alberta walked off the job Monday, prompting the provincial government to cancel all non-urgent operations, less than a week after scaling back procedures because of an increase in COVID-19 infections.

The surprise strike marked a major escalation in tension between the government and workers across the health sector. Alberta Health Services and the United Conservative Party government immediately complained to the Labour Relations Board, which issued a ruling late Monday declaring the strike illegal and ordering the workers to return to their jobs.

The wildcat strike came the same day Alberta rolled out new restrictions on social gatherings in an effort to prevent COVID-19 from overwhelming the health care system as infections set new records.

The government has been embroiled in contract disputes over compensation with doctors, nurses and support staff for more than a year and earlier this month announced plans to replace up to 11,000 health care jobs in areas such as food and laundry services with private contractors in a bid to save $600-million a year.

Unionized workers such as cleaners, porters and nurse aides launched the wildcat strike in light of the forthcoming layoffs. Other labour organizations that are sparring with Alberta quickly backed the job action, reflecting the widespread discord between the government and public employees. AHS, in a memo to physicians, staff and volunteers, said it would discipline anyone who supported the strike.

The strike affected around 30 facilities across the province and involved food services staff, licensed practical nurses, clerical employees, maintenance workers and others represented by the Alberta Union of Provincial Employees. AUPE, by Monday afternoon, said 800 people participated in the strike and expected that number to climb as tallies rolled into head office.

“Our members know that, unfortunately, members of the public would be inconvenienced as a result of their actions,” Guy Smith, the president of AUPE, said. “But they also recognize that if they don’t stand up for public health care now, it would have a much larger impact on the population down the road.”

Alberta is among several provinces with surging cases of COVID-19, which has led to an increase in hospitalizations. The province announced Monday that it recorded more than 500 new cases in each of the previous two days – setting a new record and putting the province’s per capita rate of new infections ahead of Ontario and Quebec.

There were 4,477 active cases of COVID-19 in Alberta and 118 people were in hospital as of Sunday. Nearly 4 per cent of the 12,666 COVID-19 tests processed Sunday came back positive.

“We have now crossed a tipping point,” Deena Hinshaw, Alberta’s Chief Medical Officer, said. She restricted social gatherings in Edmonton and Calgary to a maximum of 15 people, noting one-third of the province’s recent cases are tied to events such as birthday parties and weddings.

Several hospitals in the province have had COVID-19 outbreaks and hundreds of health care employees have had to miss work because of potential exposure to the virus while on the job.

Last week, outbreaks forced AHS to postpone 30 per cent of non-urgent operations – which translates to about 600 a week – in the Edmonton zone, according to spokesman Kerry Williamson. Surgical capacity across the province is down 12 per cent compared with capacity prior to the pandemic, he said.

AHS, in response to AUPE’s walk-out, cancelled all other non-urgent operations, Mr. Williamson said. He did not know how many patients were affected. Meanwhile, the health authority asked the striking employees to return to work and launched contingency plans to redeploy non-union staff, including managers.

“This action is irresponsible,” he told reporters. “Union leaders, I believe, need to be held to account.”

The government, he said, is not responsible for the walk-out and that most jobs will remain, albeit as part of the private sector.

Kate Bisby is a family physician in Calgary who is taking a leave of absence to work in British Columbia because of the way she feels the UCP has mistreated the health care system and its workers. She argued the government’s plan to cut 11,000 jobs rather than negotiate left AUPE members with no choice but to picket.

“I could not provide safe … care to my patients if I didn’t have the full team, and that includes AUPE workers,” Dr. Bisby said. (Physicians cannot unionize.)

The Alberta Federation of Labour, United Nurses of Alberta, Health Sciences Association of Alberta, Alberta Teachers' Association and the Canadian Union of Public Employees are among those who expressed support for AUPE’s strike.

Rachel Notley, the leader of Alberta’s Opposition New Democrats, said in a statement that the strike was a direct result of Premier Jason Kenney’s decisions to privatize 11,000 jobs during the pandemic.

“It is Jason Kenney who has caused widespread chaos in our health care system – the responsibility for this lays squarely at his feet,” she said. 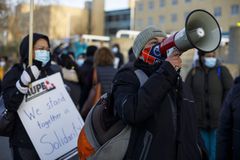 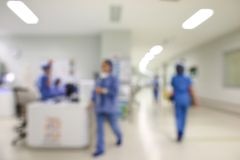 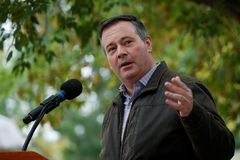