Activist Greta Thunberg was spotted in downtown Calgary’s main pedestrian mall Wednesday, and will join environmental and Indigenous groups in a climate strike in Edmonton on Friday – one of the final days in a federal election campaign that has seen some parties pitting Alberta’s energy industry against Canada’s climate change aspirations.

The rally in Edmonton – which will culminate outside on the steps of the provincial legislature – will focus the world’s attention on the province’s record on addressing climate change. The 16-year-old’s weekly climate strikes from August, 2018, have invigorated a global movement and inspired millions to march on Fridays.

“The change is coming whether you like it or not,” Ms. Thunberg said in Denver last week.

Alberta Premier Jason Kenney said he will not seek out a meeting with the Swedish climate activist, nor has he received any word from her organization. He said she’s welcome like any other visitor, and added he hopes she takes a “fair and objective” look at Alberta’s oil and natural gas industries.

Alberta’s oil sands production is energy intensive, and is a significant and growing source of Canada’s greenhouse gas emissions. But Mr. Kenney said the industry is working to further reduce its environmental footprint, and he would rather Alberta be a global energy supplier than authoritarian regimes.

“In the real world, we’re not going to shut down the modern industrial economy. The Asian countries are not going to turn off their efforts to provide energy to their growing populations,” he told reporters in Edmonton.

Ms. Thunberg tweeted that she would be visiting Alberta as part of her North American tour on the weekend, and Wednesday she was spotted on Stephen Avenue in the core of Calgary’s downtown business district. Calgary Mayor Naheed Nenshi was walking to a downtown event when a passerby mentioned to him that Ms. Thunberg was just a few blocks away.

Mr. Nenshi said one of his colleagues approached her, welcomed her to the city and offered the mayor’s business card with an invitation for a meeting.

He later told reporters there’s no meeting planned, as Ms. Thunberg just wanted to see Calgary before making her way to Edmonton. The mayor added he’s worried about Albertans taking to social media to tell Ms. Thunberg she is not welcome in the province.

“If we’re focused only on playing defence, and talking to everyone about how great we are, we’re not going to get the dialogue we need to get past this polarization.”

Ms. Thunberg said in a tweet that she will join youth and climate activists in Edmonton who are rallying for a Canadian Green New Deal, a plan for a transition to 100-per-cent renewable energy by 2030, protections for workers and Indigenous rights.

“The event is the latest in a series of climate strikes in Edmonton, which have drawn thousands to the Alberta legislature to demand urgent action on the climate crisis,” said a news release from Indigenous Climate Action, high-school and university group Edmonton Youth for Climate, the Indigenous group Beaver Hills Warriors and Climate Justice Edmonton.

“I hope her visit is not just a fly-over, but a genuine effort to learn how Canadians contribute to climate solutions,” Mr. Crowchild said in an e-mail. 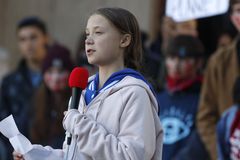 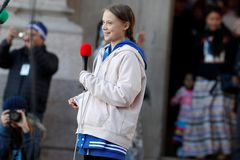