Grizzly bears seem to favour gently sloping or flat trails like those commonly used by people, which can affect land management practices in wild areas, says an expert who has written a paper on their travel patterns.

One of the reasons people encounter bears while hiking could be because they prefer the same routes as humans, said Gordon Stenhouse, a researcher at the Alberta-based Foothills Research Institute.

The study recently published in the Journal of Experimental Biology could be used by resource-based industries in areas such as forestry, oil and gas exploration, especially in Alberta, he said in an interview.

“Grizzly bears alter their movement patterns and habitat use in response to a wide range of environmental cues, including seasonal food resources, human recreation – such as hiking, camping, hunting – livestock grazing and road use,” the study says.

The study was led by Anthony Carnahan, a doctoral candidate at Washington State University.

Stenhouse said the study can help understand what areas bears use, how fast they move, how best to conserve those places and avoid conflict with the animals.

“Bears will make decisions on lots of factors and certainly, you know, the information shows that bears look for easy routes of travel, just like people do,” he said.

Changes to the landscape caused by humans raises questions about how bears are affected, he said. “For example, when we harvest the forests and bears walk through there, do they burn a lot more energy or less, or how do they travel?”

To study the slopes favoured by bears and the energy expended, scientists at Washington State University’s Bear Research, Education, and Conservation Center trained nine captive animals to walk on a treadmill at varying inclinations. The bears ranged in age from two to 15 years and weighed between 91 and 265 kilograms.

Researchers measured the bears’ oxygen levels and counted the calories they consumed while walking on the treadmill for about six minutes. The preferred speed was about four kilometres an hour with a 10-per-cent incline up or down. However, bears in the Yellowstone National Park fitted with GPS collars ambled at a comfortable rate of about two km/h.

Mr. Stenhouse said changes in a bear’s gait are related to how they forage for food.

“Grizzly bears sleep from about midday till five in the morning and they wake up. Then they start moving and as they’re moving, they’re searching the environment, seeing what food they can find,” he said.

“They might find a patch of berries or some roots to dig up, and then they keep moving around their home range. Basically, they’re feeding as they walk.”

They might have a burst of energy when they hunt a deer but there are not many of those moments, he added.

The data help understand the movement of grizzly bears, their use of landscape, the energy expended, and the nutrition they need, which is ultimately important for the long-term conservation of the species, he said.

“It’s probably not your normal thing to be putting a grizzly bear on a treadmill,” Mr. Stenhouse said.

“Some people might laugh and think it’s funny, but the overall goal is to allow better management practices and ensure conservation.” 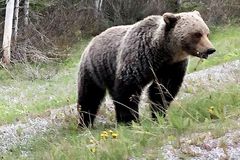 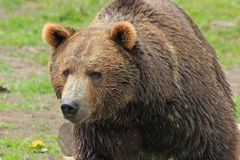