The commissioner of Alberta’s public inquiry into the funding of environmental groups intends to ask for another extension and says he won’t examine whether those groups are spreading misinformation about the industry.

Steve Allan, a forensic accountant, was appointed last year as part of a United Conservative Party campaign promise to target opponents of the province’s oil sector. Premier Jason Kenney has railed against “foreign-funded” efforts and has singled out several charities, one of which has since filed a lawsuit seeking to have the inquiry shut down.

The inquiry, tasked with investigating Canadian environmental groups receiving foreign funding, was given a $2.5-million budget and a deadline of July 2 to complete its work. Days before that deadline, Mr. Allan was given a four-month extension and another $1-million.

The inquiry’s website now indicates Mr. Allan will not meet the new deadline of Oct. 30, but it is not clear how much more time he will need or whether he will ask for another increase to his budget. The website refers to the COVID-19 pandemic to explain the latest delay and says Mr. Allan needs more time to ensure the process is fair.

The Premier has claimed that that foreign foundations have poured millions into campaigns targeting the province’s energy sector. Many of the environmental groups targeted by Mr. Kenney’s government say U.S. funding accounts for just a small portion of their overall budgets.

In particular, Mr. Kenney has said those groups have engaged in “disinformation and defamation” while criticizing the oil industry. The original terms of reference described the target of the inquiry as any “Canadian organization that has disseminated misleading or false information about the Alberta oil and gas industry.” Those terms have since been amended to say that Mr. Allan “may” examine such alleged falsehoods.

Mr. Allan now says he won’t be looking into whether any particular statement or environmental campaign was misleading.

“Such a focus is unlikely to be feasible within the resources or time available to the commission,” Mr. Allan writes in a procedural notice released this week.

“A finding that a particular person has disseminated ‘misleading or false’ information for the purpose of opposing oil and gas development in Alberta could carry significant reputational consequences, and is not a finding I would be prepared to make lightly and without undertaking extensive measures to explore, test and determine the underlying facts.”

Mr. Allan also laid out a process to notify environmental groups if he intends to make findings critical of them and give them an opportunity to respond.

Mr. Kenney said on Tuesday that he had not read Mr. Allan’s notice. He said the process was independent and he had not spoken to Mr. Allan since his appointment.

Devon Page, the executive director of Ecojustice, which is asking a judge to shut the inquiry down, said the latest change to the inquiry’s focus is yet more proof that the process has gone off the rails.

“The commissioner’s interpretation that he doesn’t have the time or resources to determine what’s misleading and false, when that seemed to be at the core of the allegations, is just bizarre," he said in an interview. "And if he’s not making that inquiry, what are the millions in dollars in funding going towards? At this point we have a hard time seeing what the intended outcome of this is.”

Mr. Allan has the power to compel documents and other evidence, but only within Alberta. Mr. Page said his group, which is based in Vancouver, believes the inquiry is illegal and won’t be responding to any requests for information.

Irfan Sabir, the NDP’s energy critic, said the inquiry has been dragging on and has not done anything to help the province’s oil sector.

“Instead of focusing on the real issues, instead of focusing on programs that will help our energy sector and help create jobs, we are still playing with the mandate and the rules of this inquiry, which has not added any value to the issues facing our economy and this industry," he said. 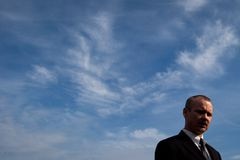