Climate scientists say a blizzard that paralyzed eastern Newfoundland signals that greater preparations are needed for extreme precipitation and tidal surges – even if a direct line cannot be drawn between individual storms and climate change.

The historic Jan. 17 blizzard dropped more than 76 centimetres of snow on St. John’s amid winds gusting at more than 150 kilometres an hour, breaking a record for single-day snowfall in the city. The provincial capital was under a state of emergency for eight days as crews worked to clear roads, and other municipalities responded to infrastructure damage and similarly deep snowfalls.

Researchers who spoke with The Canadian Press said more intense storms are likely on the horizon for Atlantic Canada, and the region should prepare accordingly.

“I think what the storm showed is that we’re not really prepared either for the increased intensity of storms, or the possibility that such storms could become more frequent,” said Brad DeYoung, an oceanographer at Memorial University of Newfoundland.

According to the federal Canada’s Changing Climate Report published last year, the Atlantic region is facing rising seas and falling coastlines. It noted that eastern coasts are continuing to sink while projecting between 75 centimetres and one metre of relative sea-level rise for the area by the end of the century.

Blair Greenan, a federal oceanographer who oversaw the oceans chapter of the report, said in an e-mail that existing science points to the likelihood of heavier precipitation.

“There is some well-understood physics that as we warm the atmosphere, the capacity of air to hold water vapour increases,” he said. “It is therefore expected that a warmer atmosphere will result in an increase in extreme precipitation events when you look at this from a global perspective.”

Dr. Greenan added “there certainly is some potential that climate change will change the frequency and magnitude of storms in Atlantic Canada,” although it’s too early to confidently say how often, or with what intensity.

“There should be an assumption now from an adaptation perspective that these are things that may be more frequent,” Ms. Consulo said by phone. “There’s no harm preparing things that support healthier, stronger, more resilient communities.”

Ryan Ness, who directs the adaptation team at the Canadian Institute for Climate Choices, said local capabilities to deal with major rainfall and snowstorms should be built up so that “we don’t have to call in the troops” after every weather event.

Canadian Forces personnel were in Newfoundland for a week after the storm, responding to hundreds of calls from people unable to dig out of their homes.

Responding to weather has become an increasingly frequent activity for the Armed Forces, especially in Atlantic Canada. Soldiers were deployed to assist with flood response in New Brunswick last spring and to help with the cleanup in Halifax after post-tropical storm Dorian hit the Maritimes in September with heavy rain and wind that felled trees and knocked out power to thousands.

Analysis by The Canadian Press last year showed military assistance was requested for 10 weather-related disasters over the previous two years, compared with 20 calls between 2007 and 2016.

Mr. Ness said looking to the experiences of those most vulnerable to storms, like the elderly or lower-income people, will be essential when planning for future events that may affect a city’s ability to function.

He also suggested looking at more sustainable housing design, legislating what can be built in high-risk areas and reviewing building-code standards for entrances and exits in provinces subject to severe weather.

Joel Finnis, a climatologist at Memorial University of Newfoundland’s geography department, said heavy snowfall is not unknown in St. John’s.

But he said some characteristics of the “weather bomb” that ravaged the region, such as intense winds up to 150 km/h in some areas, are more likely to be seen again, resulting in storm surges that wreak havoc on essential infrastructure in coastal communities.

He said continued sea-level rise and the expansion of ocean water owing to heating could aggravate the storm-surge risk.

Mayor John Norman said the crucial infrastructure won’t withstand another beating, and replacing the seawall has become an urgent issue for the town. He estimates the recent damage will cost more than $1-million to repair, but a future storm could cause extensive damage to homes, sewer and roads and end up being far more costly if the seawall isn’t repaired.

Other coastal communities in eastern Newfoundland also sustained storm surge damage climbing into the millions. Terry French, mayor of Conception Bay South, said the damage to infrastructure, from roads to storm drains, could cost into tens of millions of dollars.

Mr. Finnis said blizzards with heavy snowfall should not worry people as much as other, more damaging events.

“This storm that produced the state of emergency in St. John’s was what I might think of as a soft, or even a benevolent, disaster,” Mr. Finnis. "It was really not a terrifically expensive hazard compared to other kinds of things that we might expect to see very frequently in the future.”

He said a greater threat to the city would be a heavy rain-on-snowfall event, which was forecast but narrowly avoided the week after January’s blizzard.

Opinion
The 'Resilient Newfoundlander’ saves the day: Lessons from the storm of the century
January 31, 2020 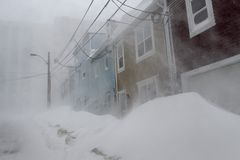 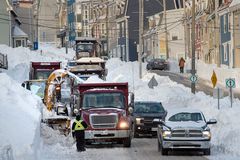 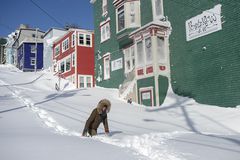