Kyle Hynes is 27. He likes kayaking, fishing and hiking with his dogs around the Rocky Mountains. He is a project manager at a helicopter company and talks with his hands when he gets excited.

He believes reindeer may hold the secret to making his life even better.

When Mr. Hynes was 5, he survived a house fire that left him with scars over 80 per cent of his body and forced him to endure years of surgeries.

“I do love my scars now,” he said. “But if I could get rid of my scars, I would be the happiest guy alive.“

Mammals scar when serious skin wounds heal. Reindeer, however, are among the few exceptions to the rule, with the velvet on their antlers, specifically, healing flawlessly. Scientists at the University of Calgary believe human skin has the potential to heal with the same reindeer magic.

Almost 30 of the creatures live on pastureland on the outskirts of Calgary. Jeff Biernaskie is among the researchers experimenting on the animals. He is a cell biologist – and neurobiologist by training – focused on tissue regeneration. His team is trying to figure out how to make human skin respond to injury the way reindeer velvet does. The research has the potential restore both the appearance and function of skin for people such as Mr. Hynes.

Reindeer sport velvet on their antlers for three to four months a year. The oily brown fuzz protects the antlers as they grow back each year. Reindeer – both male and female – depend on antlers for scrounging up food under the snow and for protection from predators. Males also show off their racks in mating season.

Dr. Biernaskie originally wanted to isolate the cells that might be responsible for antler growth, long thought to be stem cells that reside in two bony structures, called pedicles, on either side of the skull. Using anesthetic, his team removed small pieces of skin in order to access the pedicle and noticed that the wounds healed without scarring. Then they made more purposeful wounds and found the velvet regenerated seamlessly. By way of comparison, the scientists inflicted identical wounds elsewhere on the reindeers’ bodies and noted that the animals scarred at those sample sites.

When mammals are wounded, skin cells around the injury and the immune system rush to seal the site as quickly as possible to prevent infection. The natural response to injury, Dr. Biernaskie believes, is regenerative, but those signals are overwhelmed by scar-forming ones in the race to close the wound.

This, however, does not apply to embryonic cells, which are strictly regenerative. Fetal humans, Dr. Biernaskie says, heal perfectly. He says the cells that make up reindeer velvet exhibit genetic properties similar to those in embryonic cells. So if his team can activate regenerative genes and suppress those that form scars, humans may be able to regrow damaged tissue without flaws.

Drugs, administered topically or intravenously, may be able to flip the switch, and Dr. Biernaskie’s lab is experimenting on mice.

His team has been working on the reindeer project for about five years and expects to reveal its findings next year. (The animals are known as caribou in North America and reindeer in Europe. The Calgary herd comes from European stock, so Dr. Biernaskie is sticking with reindeer in casual conversation. Also, it’s Christmas.)

Scars can be psychologically and physically disabling. Scars on joints, for example, limit mobility.

“That becomes a massive burden on our economy, on our health-care system, but also on their quality of life,“ Dr. Biernaskie said.

Mr. Hynes recognizes that science moves slowly but remains optimistic that he may benefit from Calgary’s reindeer.

“I live life to the fullest, but when I see this research come out, I get really excited to know that [there is] a possibility it could work for me,“ he said. “[And] for other children who do get burns, there’s something there that might cure them.”

Be proud of your scars: They’re who you are 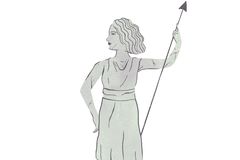