Alberta is granting exemptions to its tightened safety rules to large numbers of big-rig drivers, with that group far outnumbering those who have had to pass the tougher training and testing requirements.

Alberta, under the previous government, allowed new Class 1 drivers operating on farms to skip new training requirements that took effect in March, but they were required to eventually pass tougher tests. The United Conservative government said this week it had changed the rules so that new Class 1 drivers who did not have to take the mandatory training course can now skip the new tests entirely, so long as they have clean driving records.

The Transportation Ministry confirmed last week that 777 people were granted farming exemptions, which now means they may be eligible to drive semis without restrictions, without passing the stiffer driving and knowledge tests put in place after the Humboldt Broncos bus crash, which killed 16 people.

The province has not clarified whether the 777 have obtained licences or are simply eligible to. An additional unknown number of people received Class 1 licences without the new training in the six months prior to the new rules taking effect and are eligible to receive waivers from the tougher tests.

In comparison, Brooklyn Elhard, a spokeswoman for the ministry, said 503 people in Alberta completed the province’s updated 113-hour training course, which costs up to $10,000. That means only a minority of new drivers will have met the tougher rules.

The province would not say how many people hold Class 1 licences in the province.

Anyone who obtained a Class 1 licence prior to Oct. 11, 2018, is grandfathered from all the new training and testing requirements. The government has not clarified whether it will consider waivers for future Class 1 drivers who may be permitted to bypass mandatory safety school.

The changes come as concerns over trucking safety escalate in response to The Globe’s and Mail’s investigation detailing how immigration consultants and some trucking companies use Canada’s temporary foreign-worker program to hire foreign nationals seeking permanent residence. That investigation, published last weekend, demonstrates how companies employing undertrained temporary foreign workers make roads more dangerous. Further, The Globe last month reported the Alberta government is considering creating a two-tiered system, where new semi drivers in the agriculture industry would not have to meet the same requirements as all other new Class 1 drivers.

“We’re going to keep and raise the standards on driving. What the NDP government claims they did, they didn’t do," he said in the legislature Wednesday. “Out of respect for the victims of the Humboldt tragedy, whether they are in Alberta or another place, we will get it done."

The changes have been criticized by some of the family members of the Humboldt Broncos bus crash, which happened on a rural highway in Saskatchewan in 2018.

Shauna Nordstrom grew up in rural in Alberta, and her father drove a truck for their family farm as well as custom trucking in the off-season. She is the mother of Logan Hunter, one of the hockey players killed in the Broncos crash. She wrote a letter to Agriculture and Forestry Minister Devin Dreeshen earlier this week, after The Globe reported how Alberta was easing the rules for truckers on farms.

“When I first heard about this, my emotions started with disappointment, then to anger. Now I feel the fight within me to never stop for my son,” she wrote.

Saskatchewan has granted 140 farm exemptions and 90 of those drivers have since earned Class 1 licences by passing tests based on the new safety standards, according to Tyler McMurchy, a spokesman for Saskatchewan Government Insurance. Saskatchewan’s program comes with restrictions, such as how far new Class 1 drivers on farms can travel. Even drivers who obtained licences under Saskatchewan’s modified farm system must complete the same safety course as everyone else to keep their licences by March, 2021, when the province ends its grace period for agriculture operations.

Manitoba issued 38 agriculture exemptions, but 30 of those Class 1 hopefuls were not awarded licences because they failed to pass the tests that are designed to reflect the new safety standards, according to Brian Smiley, a spokesman for Manitoba Public Insurance. Its mandatory entry-level training program took effect Sept. 1, and 41 Class 1 driver’s licences have been issued since, he said. Manitoba’s farm exemption will be eliminated next year. 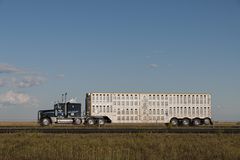 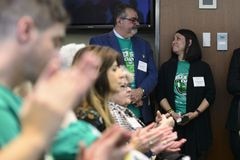