Like many Canadian communities, the tiny Métis hamlet of Conklin is dealing with a host of health and economic uncertainties that have come with the pandemic. Unlike others with far more resources, concern about the spread of COVID-19 is being given as the reason for delaying a key local vote there.

The long-awaited election to determine the president and other board positions for Local 193, which represents Métis members living on the shores of northern Alberta’s remote Christina Lake, is now likely to be postponed to 2021.

“Considering the public-health measures that are in place, the need to protect our community members including our elders and those with pre-existing health conditions – and the lack of an available facility to accommodate the election – we are not certain that the election will be held by the end of this year,” President Shirley Tremblay said in an e-mailed statement.

To now, there hasn’t been a single case of COVID-19 in Conklin, she said. But “as we know, community spread of COVID-19 is rife in Alberta now.”

Still, some residents say the election delay for 103 eligible voters in the community goes far beyond concerns about COVID-19. “With safety measures in place, we can still go ahead and have an election," said Conklin resident Grace Richards, who is putting her own name forward as a candidate for president.

“Look, the United States just had their election."

Located 150 kilometres from Fort McMurray at the southern end of the Athabasca oil sands region, Conklin is a historic centre for traditional fishing and trapping. But in recent years, it has stood out for the poor state of its housing. Many of the hamlet’s near-200 residents live in homes that have holes, substandard plumbing and sewage, or are literally crumbling. Ms. Richards, for one, lives with her cat and dog in a mould-ridden camper, with a plyboard addition serving as her kitchen.

This is striking especially since Conklin sits in the oil sands region, adjacent to major in situ developments. There has long been the belief within the community, alongside other rural areas around Fort McMurray, that it hasn’t received a fair share of oil sands wealth. Unemployment was high even before the pandemic hit global oil demand, and acquiring land for new housing has been a major issue.

There have been recent positive developments. Early in 2020, Canadian oil giant Cenovus Energy Inc. pledged $50-million for housing in the six First Nations and Métis communities closest to its operations in northern Alberta, including Conklin – a five-year process the company says is still on track despite the pandemic. In September, the Regional Municipality of Wood Buffalo, the local government for Fort Murray and surrounding areas including Conklin, transferred land for housing to Conklin for $1.

The Local election had been scheduled for November, 2019. But a delay to financial reports as well as illness among board members pushed it to the spring of 2020. It was postponed again in March when COVID-19 hit Canada.

“The board wants to hold an election. It’s just that the timing and the circumstances have made this impossible, or difficult,” said Ms. Tremblay.

The community is not a First Nation or a recognized Alberta Métis settlement. But the Local 193 volunteer board represents the Métis Nation of Alberta in Conklin. The Local also helps to make up the Conklin Resource Development Advisory Committee, which represents the community in its dealings with oil companies and energy-service firms.

The last Local election was in 2015. Ms. Richards said she has long been pushing for what she describes is more accountability from the Local board, and greater transparency on the financials – which she says are two years behind. She said it matters for low-income community members who have looked to the leaders to fight for better housing and services.

She also said a bylaw allows community members to decide to hold their own election, if they get the sign-off of at least 10 members. She said that sign-off happened last month, and the group is now planning to run their own election on Nov. 28 – if necessary, outside or in a drive-through format.

“They’re telling me there’s going to be an election, but when? Am I going to have to wait years?”

Ms. Richards also noted at least one other northern Alberta Indigenous community, the Mikisew Cree First Nation, has been able to hold an election during the pandemic.

However, Ms. Tremblay disputes Ms. Richard’s contention that there’s a bylaw that gives members the authority to call an election on their own. And many others Indigenous communities have also decided to delay votes because of public-health concerns. Indigenous Services Canada said as of the beginning of November, 82 band councils across the country have used federal regulations that allow them to postpone elections because of the pandemic.

James Cardinal, the Métis Nation of Alberta President for Region 1, which includes Conklin, said in an interview he also wants to see a vote go ahead but is concerned for the high number of elders in the community. He added the election will go ahead “as soon as we can find a place that’s open, where we can safely have people to come and vote.” 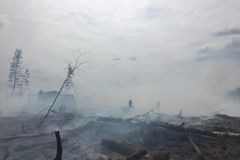