Edmonton’s mayor, who has met three times with the Prime Minister since election day, is pushing his fellow municipal leaders as potential mediators to smooth over relations between the federal Liberal government and angry Prairie-province premiers.

Don Iveson said much of the anger in Alberta and Saskatchewan is coming from economic uncertainty. He said the concerns of Albertans, for instance, pointed to a need for what he called “strategic partnerships” to avoid divisiveness that is being “exploited for narrow and short-term political reasons.”

Cities, he said, could help “depolarize” some of that heated rhetoric and push for practical solutions.

Mr. Iveson said cities are best suited to play that role because they’re the level of government closest to people, a level that “has to deliver practical solutions and can’t get away with blaming others for the real complexities and challenges we’re dealing with.”

Mr. Iveson made the comments after a session in Justin Trudeau’s Parliament Hill office, which marked the latest in a series of meetings the PM is holding with municipal leaders as the Liberals in an attempt to figure out how to make their infrastructure dreams a reality – and respond to Canadians who feel left out of the federation.

“The partnerships we’ve had in Edmonton on infrastructure, on fighting homelessness, on housing have been significant, but there’s always more to do,” Mr. Trudeau said at the start of the meeting. “We recognize, obviously, there is real anxiety and real frustration out in Alberta from people who have been having a really tough go of it over these past years.”

That sense of alienation and frustration was amplified by the Oct. 21 federal election, which returned the Liberals to power with a minority government, but stripped them of all their seats in Saskatchewan and Alberta.

Mr. Iveson said the Liberals could alleviate some of that frustration by moving ahead with the Trans Mountain pipeline expansion – something he said the PM personally assured him was going to happen.

The Liberals bought the pipeline in 2018 from Kinder Morgan for $4.5-billion after the company’s investors got cold feet over ongoing political opposition that delayed work. Delays in getting it built have fuelled anger at Mr. Trudeau’s government, including legislation that Albertans blame for economic woes in the energy sector.

“When shovels go in the ground … that will quell some of the anxiety because I think they did mean it all along and it’s actually a shame that there’s still some doubt about that,” Mr. Iveson said.

The Edmonton mayor added that Mr. Trudeau seemed open to ideas from mayors when it comes to economic development, which he discussed in the meeting alongside Infrastructure Minister Catherine McKenna and Intergovernmental Affairs Minister Chrystia Freeland, who is tasked with steering relations with provinces.

Premiers are set to meet next week in the Toronto area. Mr. Trudeau has been meeting with several of them since the election, including Ontario’s Doug Ford, Manitoba’s Brian Pallister and Saskatchewan’s Scott Moe.

“There’s a tone shift among the premiers and it would be great to see a consensus from all the premiers that we need to work together to deliver on economic and environmental and social results,” Mr. Iveson said.

Justin Trudeau is a lower-profile Prime Minister this term, and that might be a good strategy for him
November 28, 2019

Mayors urge Ottawa to get ‘creative’ on infrastructure when provinces delay projects
November 29, 2019 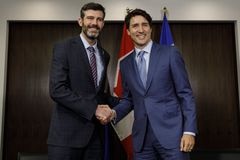