Alberta Premier Jason Kenney says hiring the former legislature member who gave up his constituency seat for Kenney was the right thing to do.

The premier dismissed a reporter’s question Wednesday on whether his appointment of Dave Rodney is political payback.

“He (Rodney) never asked for any kind of consideration in the future,” Kenney said.

“He’s been working in the private sector since that time. When we were looking for somebody to appoint to Houston, we had a short list and Dave just stood out to me as the kind of go-getter that we need.”

Kenney said Rodney approached him in late 2016 about leaving his Calgary-Lougheed seat in the legislature. Rodney eventually stepped down in the fall of 2017, after Kenney had just won the leadership of the United Conservative party. That led to a by-election that Kenny won two months later.

Earlier this week, Kenney announced Rodney will be the new agent general to Houston. He’ll be paid $250,000 a year to drum up business in the energy sector and other emerging fields.

The appointment is part of a broader plan for Alberta to be more aggressive attracting business and jobs from other jurisdictions to grow a provincial economy decimated by the COVID-19 pandemic and low oil prices.

Opposition NDP Leader Rachel Notley said Albertans can connect the dots on the Rodney appointment to draw a stark picture of patronage.

“There’s very little in David Rodney’s background to suggest that he is qualified for this position in Houston. There’s also, frankly, no reason to justify the outrageous salary that he’s being paid,” she said.

“We just have to ask Albertans to add one plus one plus one to get an inside deal to help Jason Kenney’s friend and insider whose biggest political achievement was stepping aside for Jason Kenney.”

Rodney had been an MLA since 2004 with the former Progressive Conservative party, which was later folded into the UCP.

While the Tories were in government, Rodney served as parliamentary secretary for Sustainable Resource Development and forged ties with U.S. legislators as Alberta’s energy representative to the Council of State Governments.

Kenney said Rodney has the business skills but also the legislative background critical to a job that is as much about politics as commerce.

“When (former politicians) sit down with governors, congresspeople, senators, mayors and others, they understand the political decision-making process.”

Rodney’s three-year term begins immediately. He’ll connect with investors and decision-makers in Texas through technology until the Canada-U.S. border reopens.

As part of the renewed effort at attracting investment, Kenney’s government has also introduced a bill to create the Invest Alberta Corp. It is to be an arm’s-length agency to promote the province to investors and to create new jobs.

Economic Development Minister Tanya Fir said the corporation will pursue investment in industries such as high-tech, aviation and aerospace and financial services. 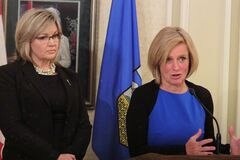