Alberta Premier Jason Kenney is defending a government-funded campaign against a Netflix film about a mythical family of bigfoot, saying it’s important to push back against what he labels anti-oil propaganda.

An oil and gas war room was established by Mr. Kenney’s United Conservative government after an election campaign pledge to fight back against alleged misinformation about Alberta’s oil sector. As part of that effort, the war room, officially called the Canadian Energy Centre (CEC), last week launched a campaign against Netflix over the movie Bigfoot Family, claiming it vilifies the oil sector.

Set in Alaska, the family-friendly adventure film follows mythical bigfoot creatures Adam and his dad as they take on an evil oil tycoon who wants to exploit a fictional place named Rocky Valley for its oil. It made its debut on the streaming service earlier this year.

Mr. Kenney labelled Bigfoot Family as “anti-oil and gas propaganda” during Question Period on Tuesday. Although the film was made by a French-Belgian company, the Alberta Premier called it “a Hollywood production that depicts oil companies ... as wanting to murder children to oppose environmental progress.”

The fact that a British tabloid picked up the story is proof the war room’s campaign against Netflix was a “massive success for Alberta,” he said.

The NDP’s Rachel Notley, leader of the Official Opposition, countered that “more people laughing at you is not a win,” and demanded the government nix the war room altogether.

The war room’s funding and its activities – including its Bigfoot Family campaign – were also the focus of questions during a budget estimates committee meeting Tuesday morning.

Asked about the movie by Opposition NDP energy critic Kathleen Ganley, Energy Minister Sonya Savage said “the comments that I’ve heard in the cartoon were quite offensive.”

“We have to find a way to counter the kinds of campaigns and the kind of narrative and the significant misinformation that is targeted at our energy sector, and discredits the hard working men and women of Alberta who work in it,” she said.

When asked how the war room’s campaign against the depiction of a fictional U.S. oil company falls within the war room’s mandate to promote Canadian energy, CEC head Tom Olsen told The Globe and Mail “it is an attack on the North American oil industry, full stop.

“The movie may be set in Alaska, but it vilifies the oil sector and has been widely viewed in Canada,” he said in an e-mail.

“No one who watches it can in good faith deny it is anti-oil messaging aimed at kids no matter where they live, and its message is clear – oil is bad, and the people who work in the industry are evil.”

Mr. Olsen said by flagging the problems with the animated film, the war room is “absolutely living up to [its] mandate – defending and promoting Alberta and Canada’s [environmental, social and governance]-leading energy sector, and the people who work in, and benefit from, the industry.”

He did not answer whether the CEC would take similar action against movies that might vilify the Saudi Arabian, Norwegian, Russian, Mexican or other oil sectors. He said the CEC campaign has so far generated nearly 3,000 e-mails to Netflix criticizing Bigfoot Family.

Ms. Savage said Tuesday that “not everybody is going to agree with every single tactic of the Canadian Energy Centre. I don’t either.”

Ms. Ganley told the committee meeting that Bigfoot Family had largely escaped public notice until the war room got involved, after which the film suddenly shot up to the list of Netflix’s top 10 movies viewed in Canada.

“The war room seems to be having what I would argue is the opposite effect ... that it is intended to have,” she said.

UCP MLA for Airdrie-Cochrane Peter Guthrie countered by saying the fact an “obscure movie” such as Bigfoot Family rocketed to the top of the viewing charts after the CEC campaigned against it demonstrates the war room’s “awesome” ability.

He also defended the war room’s work as “excellent,” pointing to its 51,000 likes on Facebook, and its research, commentary and podcasts about energy topics.

“The NDP’s opposition to the CEC – as well as the media’s and activists’ – this tells me it’s working, and working pretty well,” he said.

With reports from James Keller and The Canadian Press

Alberta’s energy war room to spend only on ‘subsistence operations’ due to coronavirus
March 30, 2020 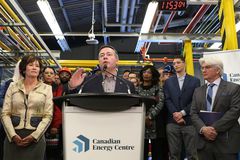 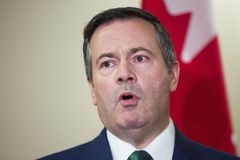