“It will be a bold and ambitious plan to make strategic investments to get people working right now when we need it most, but also to invest in the long-term productivity of our economy,” Mr. Kenney said Friday.

He said it will involve the largest-ever spending on public infrastructure, including areas such as health care and transportation.

There will also be a focus on diversifying the economy in critical growth sectors while buttressing the existing oil and gas industry.

It will be a plan for a province that was looking at a $7-billion budget deficit this year before the COVID-19 pandemic drained away jobs and business activity, and a global oil price war collapsed profits for its wellspring industry.

The budget deficit for this year is now pegged at $20 billion.

In March, Mr. Kenney announced the appointment of a 12-member economic advisory panel, including former prime minister Stephen Harper, to provide guidance on the relaunch.

Mr. Kenney has been sharply criticized by the NDP Opposition for pursuing growth strategies in oil and gas while ignoring emerging industries such as high-tech and artificial intelligence.

Mr. Kenney’s government, when it took power, cancelled tax incentives designed to grow high-tech. He said those programs were ineffective as they reached a small percentage of the tech market.

On Thursday, Mr. Kenney said part of Monday’s plan will include the outline of a new program to incentivize job-creating investment in the information technology, digital and innovation sector.

“We will be outlining a number of sectoral strategies in areas of our economy that we need to grow in order to diversify while also articulating policies that ensure a strong future for the oil and gas sector.”

Mr. Kenney won last year’s election on a promise to galvanize Alberta’s economy, struggling even then with low oil and gas prices. He promised a pan-economic, less-is-more approach, championing broad incentives and then letting the free market take its course.

To that end, his government cut the corporate income tax rate, reduced the minimum wage for those under 18, and scrapped the provincial consumer carbon tax, though that levy was later replaced with a federal version.

Albertans have the lowest overall tax burden among Canadian provinces, and Albertans do not pay a provincial sales tax.

Since then, as the oil and gas economy has continued to struggle, Mr. Kenney has assumed a more direct interventionist approach.

In March, his government agreed to provide $1.5-billion to Calgary-based TC Energy Corporation, enabling the completion of the KXL pipeline to ultimately take Alberta crude across the United States to refiners and shippers on the Gulf Coast.

The $1.5-billion in equity investment will be followed by a $6-billion loan guarantee next year.

Mr. Kenney has said Alberta will be able to sell its shares for a profit after the pipeline is built and it will generate a net return of more than $30-billion through royalties and higher prices for its oil over the next two decades. 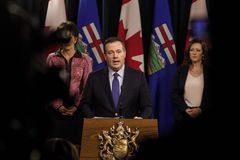