Alberta will attempt to offload oil-by-rail contracts signed by the previous NDP government onto the private sector or use legislation to avoid penalties for cancelling them, says Premier Jason Kenney, who is adamant that the province will not get into the business of shipping crude.

Mr. Kenney noted that oil producers had already increased rail shipments by the time former premier Rachel Notley announced the $3.7-billion oil-by-rail plan, which was designed to alleviate export constraints caused by a lack of new pipelines. While Ms. Notley had argued the plan would not only break even but turn a profit, Mr. Kenney said the province cannot afford to take on such financial risk.

“I agree that rail is a necessary stop gap, and we believe the private sector can and will provide that without exposing taxpayers to that risk,” Mr. Kenney said Friday during a meeting with The Globe and Mail’s editorial board.

“We have legislative powers with respect to contracts, and the message we sent is very clear: If we cannot negotiate our way out or have the private sector assume part of these contracts, then we’re prepared to pursue all powers at our disposal.”

Ms. Notley announced the rail plan late last year and signed contracts this past February to lease 4,400 rail cars and have Canadian Pacific Railway and Canadian National Railway transport them. The previous government said the government-leased rail cars would transport 120,000 barrels of crude a day by next year.

Mr. Kenney, whose United Conservatives handily won last month’s election, promised during the recent campaign to rip up the contracts and sent letters to CP and CN warning them not to spend any money to implement them. Neither the NDP nor Mr. Kenney’s United Conservative government have revealed how much it would cost to simply walk away from the contracts, but Mr. Kenney confirmed Friday there would be penalties.

Rail exports of crude hit record levels last fall, with more than 350,000 barrels shipping a day. But those shipments plummeted to about 130,000 in February as the previous government implemented production cuts that drove up the price of Alberta crude. Higher prices, especially when compared to the West Texas Intermediate benchmark, make rail shipments less economical.

“We believe that it was a very bad deal.“

The New Democrats did not respond to a request for comment. Ms. Notley, who is now Opposition Leader, previously argued cancelling the contracts would leave oil in the ground and deprive the industry of increased access to get oil to market.

During the editorial board meeting, Mr. Kenney also defended his approach to climate change. The legislature opened with a Throne Speech earlier this week, and Mr. Kenney immediately tabled a bill to repeal the provincial carbon tax. The federal government has already said it plans to step in with the national carbon tax, which is in place in several provinces including Ontario.

Instead, the UCP government will impose a tax on large industrial emitters and use that money to fund technology to reduce greenhouse-gas emissions. The rate, at $20 a tonne, is less than the $30 those large emitters are paying now.

“We have to show that we’re doing our part on the emissions side, and we are,” he said.

Mr. Kenney, who has frequently criticized banks such as HSBC that have stepped away from funding oil sands and other fossil-fuel projects, described the focus by institutional investors on emissions and climate change as the “flavour of the day.”

He noted that global demand for oil is growing, and he argued that Canada, and not “OPEC dictators," should be providing that oil.

“A barrel of oil from Iran or Vladimir Putin’s Russia or Venezuela is fuelling oppression and conflict around the world,” he said. “A barrel of oil purchased from Alberta is supporting one of the most admirable liberal democracies in the world.”

Premier Kenney trades barbs with Notley in Alberta legislature
May 23, 2019 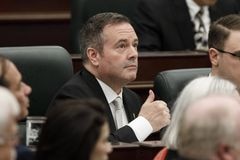 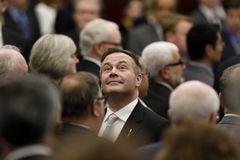