A judge has ruled that an Alberta pastor will remain in jail until his trial this spring because religious beliefs are not above public health orders.

James Coates with GraceLife Church, west of Edmonton, has been in jail for more than two weeks and was appealing his bail conditions.

Coates is charged with violating Alberta’s Public Health Act and with breaking a promise to abide by conditions of his bail release, which is covered under the Criminal Code.

Queen’s Bench Justice Peter Michalyshyn said in his decision Friday that public health laws remain valid and the pastor will stay in jail for eight more weeks until his trial begins in May.

A guide to Canada’s COVID-19 restrictions

Coates has said his religious convictions mean he cannot abide by a bail condition that he not conduct services.

The Justice Centre for Constitutional Freedoms is representing the pastor and said in a news release that it was disappointed with the judge’s decision.

“He should never have been required to violate his conscience and effectively stop pastoring his church as a condition to be released. Charter freedoms do not disappear because the government declares regular church services to be outlawed while allowing hundreds of people to fill their local Walmarts.”

Coates’s lawyer, James Kitchen, told the judge on Thursday that a determination on whether Coates’s charter rights are being violated should be made before he is jailed.

“We are putting the cart before the horse, doing things backwards. This is a matter of deep, deep personal conscience and personal beliefs. He is compelled to obey the God he loves … as are his congregants.”

The public-health prosecutor, who asked the court to address her only by her title because she is concerned for her safety, argued that the pastor’s release is a danger to the public.

The judge noted that Coates did not want the publication ban that is normally imposed on bail hearings.

The church has continued to hold weekend services, even though Coates is in custody. Many gathered for a service last Sunday, as RCMP and Alberta Health Services monitored the situation.

“Observations were again made that the church held a service beyond the designated capacity,” the Mounties said in a news release.

In an affidavit, Coates’s wife Erin Coates told the judge that since he was taken into custody at the Edmonton Remand Centre, he has lost weight and can’t sit for too long because of pain in his neck.

“The days since February 16 have been very stressful for our two sons, aged 11 and 18,” she said.

“Many congregants of GraceLife rely on James for counselling regarding marriages and personal problems such as addictions. I have observed that many children at GraceLife Church are heartbroken that James is in jail. They are confused and concerned about him.”

More than 50 people were gathered outside the Edmonton courthouse on Thursday and prayed for Coates. Some held a banner that read #freejamescoates. The judge noted that dozens of others had tuned into the bail hearing online as well.

Police fined the church $1,200 in December and a closure order was issued in January.

Coates had been addressing the province’s health restrictions in his sermons. He told worshippers that governments exist as instruments of God and there should be unfettered freedom of worship.

Alberta pastor should be allowed to lead church services until his trial, lawyer says
March 4, 2021 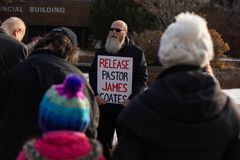 Opinion
Faith leaders must remember that we’ve taken our own version of the Hippocratic Oath
March 1, 2021 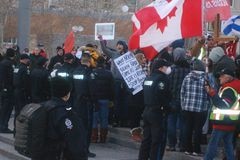 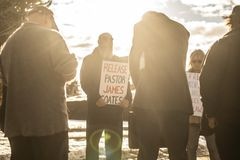