Dean Bennett
EDMONTON
The Canadian Press
Published May 14, 2021 Updated May 14, 2021
Comments
Text Size
Please log in to listen to this story. Also available in French and Mandarin. Log In Create Free Account

Alberta Premier Jason Kenney says he kept his distance in a debate over the fate of two outspoken backbenchers but believes his United Conservative caucus made the right decision to expel them.

“I did not reveal which way I was voting. I didn’t want to, you know, put my finger on the scale, but I did express my disappointment with some of the conduct,” Mr. Kenney said in an interview with CHED radio Friday.

“Ultimately what this says is we have to be a team. Let’s be professional. We can’t allow personal agendas to distract the team, or for that matter the government, from the business of governing, particularly in a time of (COVID-19) crisis like this.”

On Thursday, after a seven-hour virtual meeting, the caucus voted to turf members Todd Loewen and Drew Barnes. The vote came after weeks of caucus discontent over Mr. Kenney’s policies and decisions on the best way to arrest spread of the COVID-19 virus.

“There are a lot of internal issues, things that have happened between members, that ultimately caused, I think, a majority of our caucus to feel like they were being undermined and unable to work as a team,” said Mr. Kenney.

“I regret that — that it had to come to this — but I respect the decision our caucus has made and we’re going to move on, focused on the priorities of the public.”

Mr. Loewen and Mr. Barnes said that worked against them, because members had to text their ballot to Mr. Milliken and risk Mr. Kenney finding out how they voted.

No tally was released. Mr. Kenney said he knows it was a majority, but only Mr. Milliken knows how everyone voted.

Mr. Kenney has been wallowing in low poll numbers for months and party fundraising has fallen off sharply. But on Friday, he said: “I believe I have the confidence of the party I lead and the caucus that I serve with.”

Mr. Loewen and Mr. Barnes have said they will remain in the house as Independents to express the views of their constituents.

Both say the United Conservative Party under Mr. Kenney is no longer a grassroots-driven movement but a top-down, one-man show that sidelines and ignores backbench members and the concerns of the people they represent.

“The day could have turned out a whole bunch better for the UCP and for Albertans if the premier would start to take some responsibility and acknowledge how much of the problem he is,” said Mr. Barnes in an interview.

“Rather than acknowledge, listen and pivot, the premier decided to limit dissent.”

Thursday’s vote capped a day of internal party strife that began in the pre-dawn hours when Mr. Loewen posted on Facebook a public letter announcing he was quitting as caucus chairman and calling on Mr. Kenney to quit for the good of the party.

Mr. Loewen wrote that Mr. Kenney has botched key issues such as health care and the environment, has been weak-kneed with the federal government, and pursues confusing, contradictory and needlessly confrontational messaging.

Mr. Loewen, who represents the northern rural riding of Central Peace-Notley, said volunteers are leaving the party in droves and, without a new leader and a sharp change in direction, the UCP is headed for defeat in the 2023 election.

Mr. Barnes represents Cypress-Medicine Hat in southern Alberta. He has been the highly visible, highly critical and vocal point person for 18 backbench legislature members who have spoken out against Mr. Kenney’s public health restrictions.

The 18, most representing rural constituencies, have questioned the need for a one-size-fits-all approach, especially in areas with low case counts. They have said the measures may be more harmful than helpful at the cost of personal freedoms.

One of the 18, Ron Orr, took to Facebook on Friday to write: “I am sorry to see two members of caucus voted out, but I will not work for or support efforts to destroy the party or the leader from within.

“The premier has been more than fair and transparent with caucus. I also believe he is the leader God raised up for these times.”

Mr. Kenney has also been accused of bending too far backwards to cater to the concerns of rural areas — the core of his party’s support — at the expense of public health.

His government in the last two waves of the pandemic allowed COVID-19 cases to soar to levels that threatened to swamp hospitals before imposing stricter measures on businesses, capacity limits and on social gatherings.

Opposition NDP Leader Rachel Notley has said Albertans deserve a government focused on the pandemic and other critical issues and should not be held hostage to the twists and turns of UCP palace intrigue. 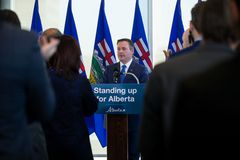