Premier Jason Kenney has warned Albertans in a televised address to brace themselves for a difficult budget with significant cuts over the next four years, but he promised the pain wouldn’t match the widespread austerity of the 1990s.

The Alberta Premier said his United Conservative government’s first budget on Thursday sets the stage for spending cuts as well as a corporate tax cut to 8 per cent from 12 per cent after five years of economic malaise in the province. Overall government spending will be reduced by 2.8 per cent over four years while funding for health and education will be frozen.

Mr. Kenney has promised to end a string of multibillion-dollar deficits within four years. Speaking on a provincewide broadcast on Wednesday night, Mr. Kenney characterized the impact on staffing levels in the public service as “modest” and said most savings will come through attrition.

The decision to freeze spending for health and education, which together make up 55 per cent of the provincial budget, means a 2.8-per-cent overall reduction will translate into much deeper cuts in other areas. Economists have pointed to postsecondary education and spending on climate change mitigation as potential targets.

“Let’s be clear: This will not be an easy budget,” Mr. Kenney said in the 13-minute address.

He noted that the pain will be small compared with the steep cuts to government spending that began in 1993, when then-premier Ralph Klein used his first budget to start cutting government spending. Mr. Klein took a jackhammer to provincial finances the following year and, by 1996, his government had cut spending by 18 per cent.

The province will be aiming to cut the deficit and taxes at a time when government revenues from corporate taxes and resource royalties – both linked to a downturn in the oil patch that started five years ago – continue to suffer. To that end, Mr. Kenney said the budget would outline programs to boost other sectors such as tourism and the film industry.

Mr. Kenney won Alberta’s election last May with a relentless focus on improving a weak economy and building pipelines. He emphasized that unemployed Albertans need to get back to work – the province’s unemployment rate, at 6.6 per cent last month, has been stuck above the national average for years.

The former NDP government ran four years of deficits as it increased services and embarked on an aggressive infrastructure program to match a quickly growing population and provide work during a recession.

Former Alberta treasurer Jim Dinning, who held the job during the Klein budget cutting years between 1992 and 1997, said he hopes Mr. Kenney’s government will introduce a budget and legislation that will be “constructively disruptive” to improve the quality of services in Alberta.

“I trust them to be careful and not careless,” Mr. Dinning said. “It will affect people, period, full stop.”

Saying it would be “immoral” to leave a massive debt for future generations, Mr. Kenney pointed to a report he commissioned from former Saskatchewan finance minister Janice MacKinnon as rationale for the cuts. “The MacKinnon panel was clear on how we got to this point: We have a spending problem,” he said of Alberta’s continued deficits.

Ms. MacKinnon concluded that if Alberta spent the same amount of money on each citizen as the average spent by the governments of Ontario, Quebec and British Columbia, the province’s $7-billion deficit this year would turn into a $4-billion surplus. University of Calgary economist Trevor Tombe said that while the Premier’s arithmetic is right, the province could raise taxes to the average level of the same three provinces and similarly end the deficit.

“Alberta is lucky because we can solve our budget problem on either side of the ledger, through either spending or revenue. We have a lot of options,” he said.

The Alberta Federation of Labour said its own analysis shows the MacKinnon report’s assumptions on GDP growth and revenue growth are flawed, tens of thousands of job losses are possible, and Mr. Kenney’s government is ignoring the role of the public sector in the economy. 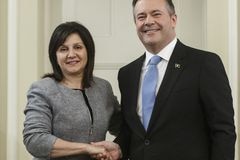