Rona Ambrose and Laureen Harper are throwing their political muscle behind a new organization that will mentor female candidates in electioneering, fundraising and navigating the world of social media – with a key goal of getting more conservative women to run for office.

The former federal Conservative Party leader and the wife of former Conservative prime minister Stephen Harper formally introduced the creation of the She Leads Foundation, a non-profit organization dedicated to helping women succeed in “politics, government and leadership,” this week.

“We need to have a vehicle where Tory women are supporting Tory women, or women with conservative political leanings,” Ms. Ambrose said of her brainchild.

Traditionally, female voters have not supported conservative parties in as large of numbers as men, and most organizations focused on getting women to run have originated from the centre or the left side of the political spectrum. For She Leads, Ms. Ambrose – a member of Ottawa’s North American free-trade agreement advisory council and an adviser to TD Securities – will act as chair of the Alberta-focused group, and Ms. Harper will serve as vice-chair. The immediate focus will be on mentoring female candidates for the Alberta provincial election to be held in early 2019. And while there is no formal link between She Leads and Alberta’s United Conservative Party, UCP Leader Jason Kenney will be on hand for the launch.

Ms. Ambrose said She Leads is being run by Tories, and she expects it will attract small-c conservative women – although no one will be left out because of their party affiliation. She praised the work already being done by the multipartisan group Equal Voice, and the Our Movement initiative recently created by NDP MP Niki Ashton, a “campaign school” focused on supporting young women and others often excluded from the political world. Ms. Ambrose said her own group will be “hands on,” focusing on mentoring, fundraising, media training, public speaking or meeting connections in the business community.

She acknowledges she has sometimes had disagreements with conservative men and women, who – owing in part to their political philosophy – believe women just need to learn to compete. But to that, Ms. Ambrose notes that women often face a number of barriers not felt by male candidates, whether it be a lack of child care, a fundraising network or outside encouragement to run – or simply a lack of confidence.

“There’s a huge void,” Ms. Ambrose said. “I also wanted to really acknowledge the fact that we have not done enough to support women to run for politics in the conservative movement.”

Ms. Ambrose said even after having departed the political world last year, she still meets "so many incredible, talented women, and I spend time talking to them. And it’s always the same thing: It’s this lack of confidence and mindset, that they’re just not ready, and they have so much more they need to accomplish before they could ever imagine entering public life.”

Young men with encouragement, on the other hand, “just jump in with both feet.”

Then there’s social media, Ms. Ambrose added, “one of the most daunting issues to deal with" for women no matter the party affiliation. She has already called Twitter “a sewer for women,” and said female politicians often face online sexual threats, sexual innuendo or violent threats.

A lot of women who have engaged in social media in their private lives have no idea what it will be like when they enter public life, and “all of sudden, they’re just inundated with really toxic stuff." One of the only things you can do is prepare for it, she said.

As the United Conservative Party’s nomination process unfolds, Mr. Kenney has made no secret of his constant, on-the-ground push to ask women to run for his party – a rebalancing of his male-heavy caucus he has desperately sought. Nearly half of the governing Alberta NDP Party’s caucus is made up of women, while just three members of the UCP’s 26-person caucus are women (and this will only be once Laila Goodridge, who won a seat in a Fort McMurray, Alta., by-election this month, is sworn in as an MLA). Mr. Kenney has said his party doesn’t believe in the “condescending approach” of quotas for female candidates.

He has argued his party is meant to appeal to all Albertans on economic issues, but the UCP’s position or equivocation on social issues rubs some voters, especially women, the wrong way. For instance, Mr. Kenney has been criticized for his decision not to debate or vote on recent government legislation to create safe zones around abortion clinics.

In an interview last week, Mr. Kenney said She Leads will provide practical political advice to female candidates who are relatively new to politics, who might not have as much experience as male counterparts.

“We just want everybody to have equality of opportunity when it comes to seeking contested nominations,” Mr. Kenney added.

Opinion
It’s the same as it ever was for women in politics
February 2, 2018 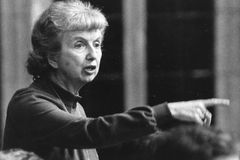 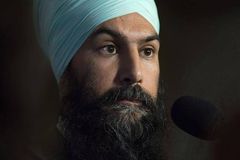