Get Smart and Stevie Knicks are lounging in the penthouse pasture. Blackstone After Party is having sex.

Rodeo announcers constantly refer to bucking stock as athletes and point out their performance accounts for half a rider’s total score.

With rodeos across Canada cancelled this summer because of the COVID-19 pandemic, broncs and bulls can’t use home gyms and treadmills like their human counterparts do to stay in shape.

“It’s just like a human athlete. If you sit around and do nothing, you’re going to get fat,” said Ross Lewis, who owns a dozen bulls in the Wild Hoggs Bucking Bulls company.

“That’s what these guys are doing. They don’t have a job right now. A big part of their day is walking from where they’re [lying] down 20 feet to the feeder, eating and then walking back 20 feet and laying down again.”

Blackstone After Party – Rodeo Canada’s bull of the year in 2019 – weighs more than half a tonne and got a job requiring some physical exertion.

“We just sent him out on Saturday to breed cows,” said Curtis Sawyer of Outlaw Buckers Rodeo. “All our heavy-hitters are going out this year to breed cows. Normally they wouldn’t. They’d be rodeoing.”

A few Wild Hoggs bulls will also be performing a service that’s often reserved for their retirement.

“Because they’ve got no rodeos to go to, they’ll spend their summer with the ladies,” Mr. Lewis said.

The Calgary Stampede rodeo in July is among almost 50 Canadian rodeos, along with multiple Professional Bull Riders Canada events, cancelled or postponed because of the pandemic.

That leaves a lot of bucking stock with nothing to do.

“They’re on the best pasture I got,” Ward Macza said. “I go give them three or four pounds of grain a day just to keep them half-assed in shape.

“They look as good as they ever have. The only problem is there’s no place to go.”

If rodeos were on the horizon, broncs would get taken out for a jog with saddle horses. Bulls might get put in a pen with a sand pit for them to dig with their horns and strengthen their muscles.

“If we knew we were going to go in a month, we’d start exercising them and changing their feed and getting them more prepared,” Mr. Sawyer said.

“They’re keeping themselves maintained by going to water and we spread salt and minerals out strategically to give them the most amount of exercise,” Mr. Kraft explained.

The Wild Hoggs herd of bulls near Nanton, Alta., has feed troughs at the bottom of a hill and water at the top.

Stock contractors agree bulls and broncs will buck the next time a rider drops on their back. Opinions are mixed on how well those muscles will fire after months of inactivity.

“It’ll take some time,” Mr. Sawyer said. “When you get going in the spring, it takes them a few weeks to get back on track and it’s going to be the same once we get going.

“It’ll take some trips and some miles just to get back in fighting shape I’d guess you’d call it.”

Veteran contractor Wayne Vold allows that bulls might come out of the chutes sluggish the first few times, but believes his broncs won’t miss a beat.

“I believe they buck better when they’re fresher,” Mr. Vold said. “I’m not worried about them bucking one bit.”

Experienced, mature broncs such as Stampede Warrior or Tiger Warrior won’t be rusty when rodeos reboot, according to Mr. Kraft.

“They’re going to buck at the top of their game any day of the week,” he said.

What pains owners is their star bulls and broncs might not perform at rodeos at all in 2020.

“Blackstone is eight years old now and he’ll be at least nine before we use him again,” Mr. Sawyer said. “That’s getting up in the twilight of his career. He’s kind of missing the end of his career.”

At 18 years old, Get Smart is the Tom Brady of rodeo. Five times Canada’s saddle bronc horse of the year, the gelding is performing and winning well into what would be retirement years for most broncs.

“Being that he’s so old, you know he only has so much time left,” Mr. Macza said. “If you skip out a year, it’s gone. Never to return.

“If it’s a young animal, you know you’ve got six, seven, eight more years left. Unfortunately he doesn’t. His age is against him.” 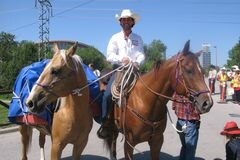 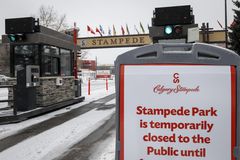 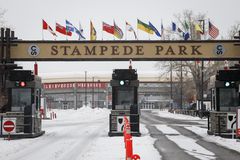