As I am putting the finishing touches on this piece, an e-mail from Nhi Tran, the co-owner of a soon-to-be-open cocktail bar forwards me a link to a guide from Alberta Health Services.

The guide revolves around risk mitigation and outlines all the things a business should be doing if it is reopening or returning to full capacity.

“What amazing notice,” Ms. Tran says sarcastically. It’s 9 p.m. at night and this guide is for the beginning of Phase 2 in Alberta, which starts in a handful of hours.

Recently, the province has given many restaurants the green light to operate, and, after a long and uncertain wait, businesses are now scrambling to figure out how to adapt under new, extraordinary circumstances.

Ms. Tran and her partner Tannis Ennis are preparing to open Paper Lantern, a Vietnamese-inspired cocktail bar in Calgary’s Chinatown. Drawing from her Vietnamese heritage and Ennis’s love of cocktails, they have been preparing to open their doors for months and were hoping to do so in April, before the world turned upside down.

Not sure what to do, the couple decided to try out tropical cocktail kits to give people a taste of what their bar might offer: mai tais, hurricanes and pandan coladas, a spin on the classic colada using the pandan plant common in Vietnamese cuisine. The response was overwhelming. The two say they have temporarily paused their kit offerings to focus their opening later this month.

“Once we open and get our groove, then we will bring them back,” Ms. Tran says. “It has definitely been interesting having to introduce yourself to the city through cocktail kits, but it has actually been a really fun way.”

Although she admits it’s unfortunate that Paper Lantern can’t open up as the cozy cocktail bar they were hoping it would be, Ms. Tran is still excited for people to come and experience their Vietnamese cuisine and tropical drinks.

“It is concerning that we can’t have an intimate space and hardly anyone along the bar, but every cocktail concept is faced with this reality now. We’re still trying to get creative with the empty space between tables and add some fun decorations that play into our theme,” she says. “In general, though, I think [patrons] are really forgiving right now when they go out. This isn’t an ideal situation for them either.”

Other Alberta businesses such as Brasserie Kensington and Blink have undergone complete facelifts to become new concepts – Eat Crow and Annabelle’s Kitchen respectively – that are better suited to dining in a postpandemic world. Empire Provisions, a popular deli/café concept in the city kept their name, but also underwent substantial renovations to better suit our changing world.

“We’ve slimmed down the cafe menu to accommodate a simpler grab-and-go concept after recognizing that [this] would become a greater part of our business once we reopened,” says Empire Provisions co-owner, Karen Kho. “We just didn’t see guests sitting down at Empire for a meal, especially since the café is small and we had communal tables.”

Now with very minimal seating and more space for retail, Ms. Kho explains that they are able to offer a much larger area for locally made food and drink products for customers to opt for. They’ve also found a wild amount of success with their Lil’ Empire smash burger kits that allows people to make their signature dish easily at home.

“We consider this our Phase 1 solution,” Ms. Kho says. “We know our customers will have reservations about dine-in options for quite some time, especially in small intimate spaces such as ours, which is why we are also working on small party catering options for groups up to 50.”

In Winnipeg, Scott Malcolmson’s restaurant Juneberry was another anticipated concept whose opening was paused indefinitely due to the pandemic. Manitoba has been slower to relax restrictions for local businesses than Alberta or B.C., but now as local restaurants and bars are beginning to reopen for dine-in service, he is eyeing a midsummer opening.

“Our base concept and menu has remained the same, but we’ve changed how we are laying out the restaurant,” Mr. Malcolmson explains. “We planned for about 48 seats instead, so now we’re looking at about half of that ... or less, but since we had not opened [before the pandemic], we can try to maximize our space before we open.”

He admits there is some level of caution in opening a restaurant after COVID-19, especially since restaurants inherently encourage people to get together. When it comes to building his team, Mr. Malcolmson says the spark of love of hospitality in both kitchen and front-of-house staff has been easy to find.

“This hasn’t been enough of a jolt for industry professionals to consider a different career altogether, which is nice to see,” he says. “Opening [this summer] is nerve-wracking because restaurants have famously low profit margins and restrictions still in place make margins even smaller. Now, more than ever, restaurateurs will need to be on top of all of their costs.” 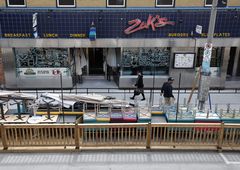 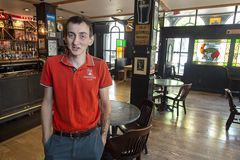 A guide to eating out again as restaurants start to open up
June 3, 2020 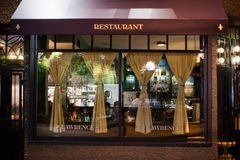