Jason LeBlanc will hop in one of his farm’s semi-trailer cabs next week to join a convoy of trucks and big rigs heading to Ottawa that was originally conceived as a rallying call for Alberta’s oil sector and Western frustrations with the federal government.

For Mr. LeBlanc, a lifelong cattle and grain farmer in Estevan, Sask., the reasons for his anger with the federal government − and Prime Minister Justin Trudeau in particular − are fairly straightforward. He opposes Ottawa’s carbon-tax plans, which he says will devastate farmers and harm the resource sector that is deeply rooted near his home in southern Saskatchewan.

"It’s going to be a pretty heavy hit,” said the 47-year-old Mr. LeBlanc, who followed several generations of his family into farming.

The idea of a convoy grew out of rallies in Alberta and elsewhere in Western Canada in recent months that initially focused on the slumping oil industry and the need for pipeline access for Alberta crude.

But some of those rallies, and the cross-country convoy that sets off on Thursday from Red Deer, Alta., have become overshadowed by the presence of self-described “yellow-vest” protesters. They’ve adopted the uniform from the movement in France and introduced a long list of grievances, from the carbon tax and environmental legislation to anti-immigration messages and at-times violent rhetoric that have prompted condemnations from politicians and a split among convoy organizers.

Mr. LeBlanc doesn’t identify as a yellow-vest protester himself, but he has no problem riding alongside them to Ottawa and joining them at a planned rally on Feb. 19 on Parliament Hill.

“I’ve got nothing against the other ones, including ‘yellow vests,’ ” he said.”They all have great intentions. But it’s just like anything, a couple of bad apples maybe got a few comments that stirred the pot a bit."

A cross-country convoy was first pitched by a group called Canada Action, run by a Calgary realtor whose pro-resource rallies have attracted municipal, provincial and federal politicians from across the political spectrum. The group had raised tens of thousands of dollars online but cancelled the event and refunded donations to avoid confusion with a competing yellow-vest-aligned convoy.

The organizer of the second event, Glen Carritt, launched what he originally described as a yellow-vest convoy. He has since renamed it to United We Roll and recently removed most mentions of the yellow vests from his website and a GoFundMe page. However, he said his group still identifies with the yellow vests.

“We still stand behind the ‘yellow vests,’ but whether you want to wear the yellow vest or not, we welcome all respectful, hard-working Canadians,” he said.

“It’s for anyone that has any issues with the current government. … The list is endless.”

Mr. Carritt noted that his group has repeatedly said that racist or discriminatory views are not welcome and he said volunteers will ensure such extremist messages don’t make it onto the convoy.

The yellow-vest movement has been the focus of increasing scrutiny in Alberta and elsewhere in Canada, as small-scale rallies have become commonplace in some communities and a regular feature of public events featuring the Prime Minister.

In Calgary, for example, several dozen protesters donning yellow vests have been gathering for weekly demonstrations outside city hall. While some protesters held signs supporting the oil sector and pipelines, others promoted conspiracy theories involving “globalists” and Hungarian-American billionaire George Soros, denounced the United Nations and a non-binding UN pact on migration, and called for Mr. Trudeau to be arrested for treason.

The messages are similar on the various yellow-vest Facebook groups, where critical posts about immigration and Islam are common. On a Facebook group linked to the convoy, which requires permission to join, attacks on the Prime Minister had become such a problem that administrators regularly post reminders that death threats are not permitted.

Alberta Premier Rachel Notley condemned the “yellow vests” last month and urged pro-pipeline protesters to root out extremists, while United Conservative Party Leader Jason Kenney has raised concerns that side issues or extremism could distract from the issues facing the province’s resource sector.

Several weeks ago, Canada’s ambassador to France said yellow-vest protesters in this country bear little resemblance to what’s happening in France. Instead, Isabelle Hudon said the Canadian movement appeared to have been appropriated by far-right extremists espousing racist and anti-immigrant views.

Charles Smith, a political-science professor at the University of Saskatchewan whose work focuses on the labour movement, agreed that Canada’s yellow-vest protesters have little in common with the movement in France.

“There was a sense that the protests in France were related to the so-called gasoline tax, and then the right in Canada tied that idea to their anti-carbon-tax position,” Dr. Smith said.

“When you look at France, it was much more diverse and complicated than just that. It was cost of living, plus wages, plus brutal austerity.”

Max Conn, a cabinet maker from Calgary who will be taking his two adolescent daughters with him on the convoy, originally signed up for the Canada Action convoy but said he plans to have a yellow vest with him next week as he sets off.

He said his business has suffered as the downturn in the energy sector has hurt home construction and renovations. And while he said economic issues are a big factor for him, he also listed the UN immigration pact, the carbon tax and the Paris climate-change accord among his complaints.

Mr. Conn rejected the claim that racism or extremism is commonplace among yellow-vest protesters. What is common, he said, is anger with the provincial and federal governments − and a desire to communicate that anger to people outside the West

“It’s not so much for the politicians, but it’s for Canadians to see what’s going on.”

Pro-pipeline protesters plan convoy to Ottawa in February to back demands for action
December 31, 2018 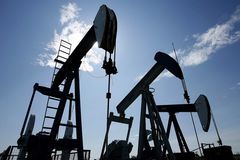 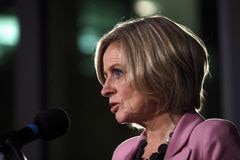 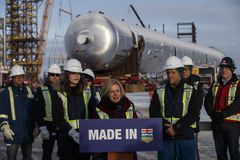