Alberta has emerged as North America’s hot spot for a rare parasitic disease with potentially deadly consequences for people who contract it, despite an incubation period of up to 15 years.

Human alveolar echinococcosis (AE) is gaining traction in Western Canada thanks to the abundance of coyotes carrying the tapeworm Echinococcus multilocularis. People are at risk of being infected with AE after consuming the tapeworm’s microscopic eggs, most likely by eating foods (such as unwashed produce from an outdoor garden) contaminated with stool from coyotes or foxes carrying the parasite. Dogs can also contract the parasite from another animal’s stool and pass it to humans.

The disease remains rare in humans and cannot be transmitted between people. But it is on the rise in Alberta and, like the coronavirus that scientists believe originated in bats, is a warning that humans need to be better attuned to our surroundings, researchers argue.

“This is not COVID – we haven’t had hundreds or thousands of deaths,” Stan Houston, an infectious-disease expert at the University of Alberta, said. “But there is a connection there: COVID has reminded us of the important intersection between human health, animal health and ecosystem health – and that we should be paying more attention to that.”

Scientists identified 17 cases of human AE in Alberta between 2013 and 2020, according to research Prof. Houston and his colleagues recently published in The American Journal of Tropical Medicine and Hygiene. While this figure is small, only two cases of human AE were confirmed in North America, save for an island in Alaska, prior to this period – one in Manitoba in 1928 and one in Minnesota in 1977, according to the researchers.

Globally, there are about 18,000 cases of AE each year. It can incubate for up to 15 years, and results in a tumor-like mass on the liver, with potential for spread. Symptoms include fatigue, weight loss and abdomen pain, but AE is often diagnosed incidentally, when it shows up on abdominal images ordered for other health problems.

Alberta’s 17 cases are associated, by time and geography, with the rise of the European-like Echinococcus multilocularis in local wildlife. Six of the 17 AE patients were on immunosuppressive therapies, which indicates the surge of cases may increase. One of the 17 patients in Alberta has died, the paper said.

“The high proportion of immunocompromised individuals among our patient group suggests that we may be at an early stage of emergence of the disease in North America because these patients are likely to have shorter incubation periods,” Prof. Houston’s paper said. “This conjecture is supported by the high proportion who were found incidentally, at an early stage before progression to symptomatic disease.”

Between 25 and 60 per cent of urban coyotes in Calgary and Edmonton carry the problematic tapeworm, Prof. Houston’s paper notes. It is relatively harmless for coyotes, dogs and foxes, but it kills rodents. Dogs can also carry the parasite’s eggs in their fur, after rolling around in infected feces in a park, for example.

Emily Jenkins, acting department head of veterinary microbiology at the University of Saskatchewan, published separate research on AE after studying a case in Saskatoon. She noted the disease is rare even where it is highly endemic, but people should still be aware it is circulating.

“It takes a certain amount of risk factors for a person to actually get exposed and develop the disease, but when they do, it is really scary,” she said. “It is a really difficult-to-manage disease.”

AE is treated with albendazole, an anti-worm pill the World Health Organization considers essential. The drug, however, is not available in Canada without permission through Health Canada’s Special Access Program. Surgery can also be used to manage AE. 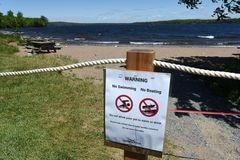 Toronto animal-control companies say calls about squirrel infestations are up
May 30, 2021 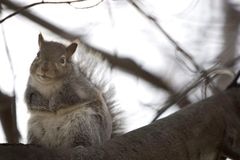 ‘Something much bigger:’ Calgary charity hopes to expand to keep kids with pets
February 21, 2021 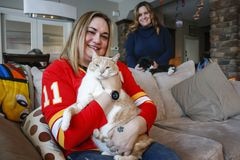