The Red Deer hospital expansion became personal for George “Joe” Smith when a friend of his died while being transferred to Edmonton for treatment. It became a matter of life and death when Mr. Smith found himself in the back of an ambulance, making that very same “trip from hell.”

“Sometimes I get angry at this,” says Mr. Smith, sitting in a medical office in Red Deer last week, recounting the details of that trip, an ambulance carrying him 150 kilometres north on a busy highway while he suffered a heart attack last February.

The expansion of medical service and hospital facilities in Red Deer has emerged as one of the core local issues facing voters in the central Alberta city, and one of the main considerations residents such as Mr. Smith will face at the ballot box next week. But Mr. Smith says the hospital issue didn’t occur under just one party, and he says the question for him now is, who will fix it?

For much of its history, the city of Red Deer was a reliable conservative win. Its electorate traditionally swung to the right both provincially and federally, and the city was considered a conservative stronghold until the election of NDP candidates Barb Miller and Kim Schreiner as part of the “orange wave” that swept the province in 2015.

But while some observers say it will be difficult for the two NDP backbenchers to retain their seats in the April 16 election, the margins of the conservative vote in Red Deer haven’t always been significant – the area’s longest-serving MLA, Stockwell Day, eked out his win against a Liberal the first time around – and with voters such as Mr. Smith still weighing their options, it appears the city could be very much in play come election day.

“The promises are coming out for the election, of course,” Mr. Smith says. “But why didn’t they do something in the last 10 years [the hospital overcrowding] has been going on? They could have fixed this a long time ago, because this isn’t the first time it’s being raised. That’s the problem, because no matter which party it was, they’ve promised this before and it hasn’t happened. So who do you believe?” 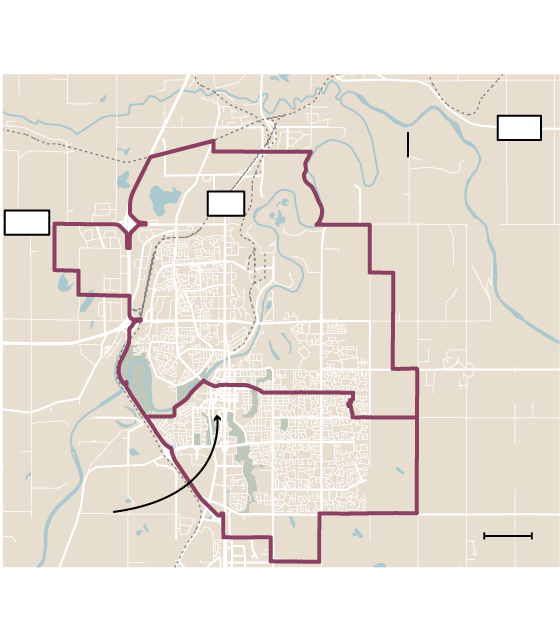 THE GLOBE AND MAIL, SOURCE: elections 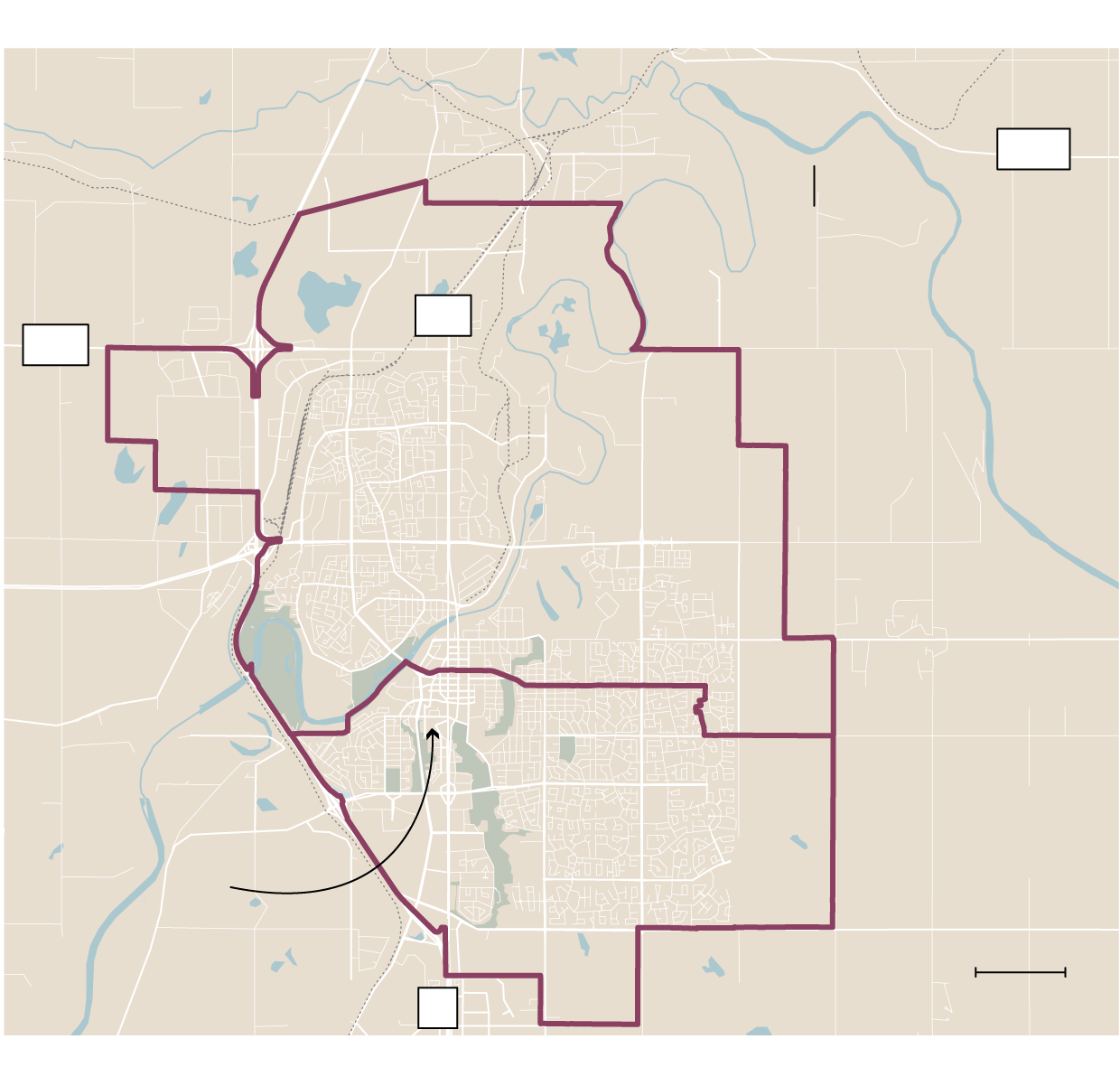 The city of Red Deer is Alberta’s third-largest city, a community of just more than 100,000 people draped along the Queen Elizabeth II Highway almost precisely midway between Edmonton and Calgary.

Red Deer is a blend of urban and rural, a hub of agriculture and industry, with a college that is now becoming a university, and an arts and culture scene that includes a symphony. It was the recent host of the Canada Winter Games and is the new home of the Canadian Finals Rodeo, and it recently appeared in national news coverage as the starting point for a convoy of pro-pipeline protesters who travelled to Ottawa.

But despite its size and proximity to the province’s two major centres, Red Deer can be an overlooked player on the provincial stage; a place to grab a snack from The Donut Mill or fuel up along Gasoline Alley, but not always afforded the attention it deserves.

“I tell people everything I learned about politics I learned in Red Deer,” said Mr. Day, who represented the city’s north riding from the time it was created in 1986 until 2000, when he left to become leader of the Canadian Alliance party federally. “If somebody had one day in Alberta from another universe, I’d say go to Red Deer, drive around, hit some coffee shops and you’re going to get a flavour of Alberta.”

In addition to the hospital expansion, Mayor Tara Veer says the city’s biggest issues are the economy – despite moves toward diversification, Ms. Veer notes the area remains very reliant on the energy sector – as well as concerns around local crime rates, drug addiction and community safety.

In all of these areas, Ms. Veer says voters in Red Deer will expect to see action from whichever party takes the city’s seats.

“I think regardless of political stripe, Red Deerians have expectations to see improvements in our local and provincial economy, to see progress and substantial progress in regard to pipeline infrastructure nationally, to see a strong response with respect to crime and addictions, and to see the hospital expansion,” she said. “Those issues are priority because they are personal for people. I would certainly suspect that whoever shows the most leadership and commitment to those specific issues would likely be looked upon favourably by the electorate.”

Dr. Kym Jim, a doctor of internal medicine and nephrology who heads the non-partisan Society for Hospital Expansion in Central Alberta (SHECA), says per-capita health spending at the Red Deer hospital is in some cases 1,000-per-cent lower than in other parts of the province, and that the severe lack of space and resources is critical not only for people in Red Deer, but throughout central Alberta.

But how – or if – the hospital expansion will play into a decision at the polls, and what will happen afterward, remains to be seen.

“Today I was asked by a patient, ‘Who should I vote for?’ I was literally asked this question 45 minutes ago when I was in clinic,” said Dr. Jim, sitting in his Red Deer medical office beneath a large portrait of a Hereford bull from his family’s ranch. “I basically said that various parties have made commitments, and no matter what party gets in, they’re going to have to be pressed on that commitment. I think [the parties] all are recognizing there’s a problem here. I think the issue is going to be getting them to solve the problem.”

The city’s hospital dropped off the list of priority projects under the NDP in 2016, but has since been reinstated, and the NDP, Alberta Party and UCP have all committed to making the hospital expansion a priority. (Local Alberta Party candidate Paul Hardy is a doctor, and one of the founders of the hospital advocacy group.)

Red Deer resident Lynn Van Laar says she first realized how critical the hospital expansion was after her stepson was brain injured in a car accident, and then again when suffering her own health issues.

In one recent admission to hospital, Ms. Van Laar says she slept in a lounge chair in a crowded makeshift hospital room for two days. She says the fact all three established parties in her riding have identified the hospital as a priority shows they are listening to Red Deer, finally.

“Will they follow through?” she asked. “They’re politicians. Who knows.” But, she added, “This time we’re not going away.”