Regardless of the outcome, Alberta’s provincial election Tuesday will be historic.

Should NDP leader Rachel Notley defy the polls and win, she would be only the second woman in Canadian history to lead a provincial government to re-election. (B.C.’s Christy Clark was the first.) A New Democratic Party victory would also confirm the view that Alberta is no longer the last bastion of cowboy conservatism, that the mass in-migration of young people over many years has irrevocably transformed the nature and politics of the province.

However, should the polls hold, and Jason Kenney and the United Conservative Party take control, the implications for the province and the country are profound. If Mr. Kenney follows through on even half of his campaign threats, the impact will be felt from St. John’s to Victoria.

It is not an exaggeration to say that the legitimacy of the federation will be tested in ways it hasn’t for several years, maybe since the height of the western separatist movement, or the more worrisome days of Quebec nationalism. Certainly, Mr. Kenney has pledged in short order to establish a highly confrontational position with Alberta’s western neighbour, British Columbia. Mr. Kenney routinely incited applause on the hustings by promising a more bellicose relationship with the province, whose NDP government has sought to stand in the way of a new pipeline to tidewater.

Mr. Kenney has vowed that the first order of business of a new UCP cabinet will be to declare into law a bill giving the Alberta government authority to limit oil and gas shipments to the coast. Carrying through on the threat would send gasoline prices in B.C., already at astronomical levels, further through the roof.

It would almost certainly prompt the NDP government of John Horgan to seek an injunction from the courts on grounds that the “turn off the taps” legislation is unconstitutional.

Should the United Conservatives win, it is the confrontational demeanour Mr. Kenney has already struck with the Liberals in Ottawa that will be worth watching.

Mr. Kenney’s administration would establish a western flank for a conservative bloc of governments stretching across the prairies to Ontario. Among the Premiers governing these provinces – Scott Moe of Saskatchewan, Brian Pallister of Manitoba and Doug Ford of Ontario – Mr. Kenney would likely emerge as the group’s de facto leader, a consequence of his political acumen and senior experience.

The four are already allied in their fight against the federal carbon tax. Mr. Kenney will also likely try to gain their support for his campaign to have the federal equalization formula revisited. (A more challenging assignment.) It’s also difficult imagining there not being some kind of co-ordinated strategy to help federal Conservative party leader Andrew Scheer win election in October. Mr. Ford, and Mr. Kenney in particular, seemed determined to poke sticks in the wheels of federal Liberal policy at every opportunity.

Of course, the irony is the same federal Liberal government owns the only major oil pipeline going to B.C. right now, Trans Mountain, and the rights to expand it. It is currently endeavouring to meet requirements set out in a federal court ruling last year, which found, among other things, the government had failed to consult adequately with aboriginal groups opposed to the project.

So we could soon witness a conservative Premier in Alberta, fighting with a Liberal Prime Minister in Ottawa, who is trying to build the one thing Mr. Kenney’s province needs most – a new pipeline to tidewater. That is the absurd nature of our politics in 2019. Even more farcical is the real possibility that Mr. Kenney and Mr. Scheer get to break ground on a Trans Mountain pipeline after most of the heavy lifting had been done by Ms. Notley and Mr. Trudeau.

As laughable – or tragic, depending on your perspective of these things – is the fact Mr. Kenney has vowed to roll back virtually all of the environmental measures that Ms. Notley brought in to gain the Liberal government’s support for the pipeline. But Mr. Kenney has demonstrated no qualms about reneging on a quid pro quo agreement that his province made to get the pipeline expansion constructed. (See absurd nature of our politics above.)

By Wednesday, Alberta could have, in Jason Kenney, the most combative and course-altering Premier since Ralph Klein in the early 1990s. Or Rachel Notley will have pulled off an upset for the ages, a scenario with which she is not unfamiliar. 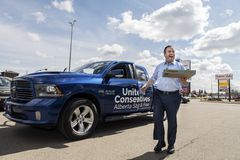 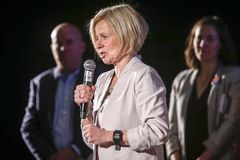