Scott Banda hears his supporters before he sees them.

Mr. Banda is the chief executive officer of Federated Co-operatives Ltd., the Saskatchewan company that locked out unionized workers at its oil refinery in Regina on Dec. 5, 2019. The locked-out workers and other members of their union have defied court orders to allow FCL’s fuel distribution trucks to the site so they can ferry gasoline and diesel to retail stations. Now, Mr. Banda is holding a news conference in a parking lot in Carseland, a small community in rural Alberta, where union members are blocking FCL’s fuel delivery trucks at a distribution hub seven kilometres to the west.

Scores of people who believe the union’s actions are harming other businesses have turned out to support Mr. Banda.

A handful of semi-trucks and passenger vehicles play follow-the-leader on Railway Avenue, honking as they make a co-ordinated entrance. United We Roll Convoy For Canada, the folks best known for driving big rigs to Parliament Hill in 2019 to protest against Prime Minister Justin Trudeau, organized the mobile squad. A Yellow Vest supporter blasts Bon Jovi’s It’s My Life after parking his van. They join Co-op employees from independent locations and other company backers outside the community hall.

However, Mr. Banda and Unifor agree more is at stake: This labour dispute is a test case for both sides.

FCL says it is about defending companies’ right to do business during a labour disruption, and union members believe it is about measuring how far companies will go in attempts to roll back pension benefits. It is about challenging the legality of barricades and testing the justice system’s willingness to enforce rulings. The most consequential part of the labour dispute is, for now, taking place in courtrooms rather than boardrooms.

“Until Unifor is compelled to abide by the law, they will be emboldened to act in this way in future disputes everywhere in Canada,” Mr. Banda tells supporters in Carseland on Wednesday. “Blockades as a tactic to get your way – that’s a challenge and a precedent we should all, as business owners and leaders of business, be very, very, concerned about.

“We owe it to every other business to not allow this illegal activity to set a dangerous precedent for all of them,” Mr. Banda says. This is the first labour dispute at the company’s refinery, he adds.

Mr. Banda poses for photos with the lead United We Roll truck before the convoy moves to the union barricades at FCL’s Carseland facility down the road. The truckers want in. Mounties are at the site, knowing conflict is coming.

FCL locked out about 800 refinery workers 65 days ago. The fallout is rippling across the country. Picket lines are popping up at retail stations, and a cluster of fuelling locations were empty earlier this week. FCL imposed rations at cardlocks – 24-hour unstaffed stations where customers fill up and are billed later – in western Canada. Some Unifor members have been arrested; some FCL managers’ homes have been paintballed. (Unifor represents The Globe and Mail’s unionized journalists).

Managers and replacement workers are operating Regina’s refinery during the labour disruption. Oil arrives by pipeline, and the company can transport some refined products to other locations – terminals like Carseland – by train and pipelines. But it needs fuel delivery trucks to supply its retail network.

The refinery ships fuel by pipeline to two distribution terminals in Winnipeg. Royal Dutch Shell PLC owns one, Imperial Oil Ltd. owns the other. FCL trucks usually deliver fuel from these hubs to retail stations in eastern Manitoba and northwestern Ontario. Unifor members, however, are not letting Co-op trucks in. As a result, 22 retail fuelling stations ran dry on Thursday. Co-op’s competitors also use these depots and union members are letting them in.

FCL is reviewing its legal options in Winnipeg, spokesman Cameron Zimmer said, because it does not own the terminals, unlike the facilities in Regina and Carseland.

A Saskatchewan judge instructed the union on Dec. 22, 2019, to allow FCL access to the refinery, while noting that the workers could still picket. Unifor ignored the order, and on Jan. 22, 2020, a judge found the union in contempt of court and issued a $100,000 fine. FCL and Unifor met on Jan. 31 to bargain, but the truce lasted just 13 hours. They have not met since.

On Thursday, Unifor and FCL appeared before another Saskatchewan judge in another contempt of court battle. The judge has not yet issued his decision.

On Friday, Regina Police Service said it is “overseeing the process of clearing structures and debris” next to the refinery in accordance with the court order from December. FCL trucks can get in through some gates.

A judge in Alberta on Thursday issued an injunction designed to give FCL vehicles access to the Carseland site. FCL on Friday returned to court to request enforcement of the order, because it says the union is not abiding by it.

Unifor members from across the country are participating in the disruptions in the Prairies. In Carseland, about 50 members are on site during the day. They are letting cardlock customers through the fences they erected, and offering $25 gift cards from a Co-op competitor to make up for the inconvenience. There is confusion over whether Unifor granted cardlock customers access before the fences attracted media attention. Unifor members say yes, some locals say no.

Tshweu Moleme is a union representative from north of Toronto picketing at the Carseland site.

“This is a precedent-setting, historic situation that would mean hell for the country,” he says. If Co-op gets significant pension concessions, "I’m sure many others would follow in those very footsteps.

“They are most certainly being watched by other businesses...[to see] if they are able to get through with this attempt at taking away pensions," Mr. Moleme tells The Globe and Mail.

United We Roll and other convoy participants fill up at the Carseland location without problems after Mr. Banda’s press conference. Then, protesters on both sides of the dispute form a blob at the gate, some yelling, some chanting, some debating face-to-face. A Mountie in a truck box films the confrontation while more officers hover. People take video on their cellphones. It remains non-violent. Some shake hands with their opponents after the clash.

Les Michaelson wanders around the gathering with a megaphone. He participated in the United We Roll rally in Ottawa.

“This is an illegal blockade,” he says into the megaphone. “This is against the people of Canada. That’s why we’re here.”

People are milling around and shouting. A union member leads a chant to drown out FCL supporters. 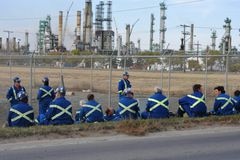