Courtney Denard and her husband, Rob Kirkconnell, were gathered with family at Christmas a few years back when a weird feeling came over Ms. Denard.

The pair, along with Mr. Kirkconnell’s parents, operate Valleykirk Farms Ltd., a dairy farm with around 60 milking cows. For decades, that meant planning life around morning and afternoon chores. But earlier that year, on Halloween, Valleykirk fired up its new robotic milking system. And with that, the cows no longer dictated when Christmas dinner – or any dinner – is served.

Valleykirk’s 2017 renovation project cost $1.3-million and roughly doubled the farm’s debt, which spooked Ms. Denard when it came time to sign the loan. But the robotic milking and feeding systems freed up time, made chores less strenuous and reduced the need for hired help. Ms. Denard and Mr. Kirkconnell have more time to rest, spend time with their three-year-old daughter and manage their herd near Owen Sound, Ont.

“The biggest epiphany, for me, that our life has changed is we can eat family dinner,” Ms. Denard said. “There is a direct line between automation and our improved happiness on the farm.”

Ms. Denard is not alone. While farmers are at higher risk for stress, anxiety and depression compared with the general population, researchers have linked automation and technology to improved quality of life in agriculture. A new study out of the University of Guelph goes further, connecting farmers’ well-being to the welfare of their animals.

Meagan King shaped the study, which included 28 dairy farms in Ontario and about 2,100 cows in all and was published in Animal Welfare, a peer-reviewed journal. The farms all had robotic milking systems, and some, like Valleykirk, had a second layer of technology: automated feeding systems. Farmers in the latter category reported better mental health and their cows were in better shape, the study found. Investigators, however, have not determined whether healthier farmers raise healthier animals or whether healthier animals make farmers healthier. They suspect it goes both ways.

“Whether it is a positive or negative situation, how a farmer is doing will impact their ability to manage their cows’ health,” Prof. King, now at the University of Manitoba, said. “They really see how their herd is doing as a reflection of their work, and so, if their cows are healthy, they feel a lot of pride in that.”

Automation can increase profit, which may lead to happier farmers. But Trevor DeVries, a professor at the University of Guelph who holds a Canada Research Chair in dairy cattle behaviour and welfare, said research shows money is not the primary reason farmers are automating.

“The greater reason is typically associated with the quality of life – both of themselves and their cows,” he said.

Morgan Overvest grew up on a farm in Ontario and moved home four years ago to get more involved. Her family’s operation has a robotic milking system but not automated feeding. Her days revolve around feeding cattle, which drives anxiety. She said automated feeding would save their operation, known as Overdale Farms, roughly three hours of labour each day.

“That would definitely take some pressure off,” said Ms. Overvest, who studied at the University of Guelph and participated in the study as a farmer. (A new feeding system on their farm, however, would mean revamping their storage system, creating other headaches.)

But even switching to robotic milking made life better on Overdale Farms, she said. “Your day becomes so much more flexible,” she said. She and her husband do not have children, but she can see how automatic feeding would make it easier to expand their family. “You can go to your kid’s soccer game or you have dinner with your family at five o’clock rather than eight o’clock.”

Ottawa prepared to give up dairy tariffs for access to Europe's markets
February 5, 2013 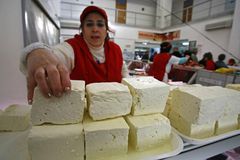