Bison are not what you think they are.

The bison steaks at the swish restaurant downtown, bison burgers from A&W, bison briskets from the farmers market: Not bison. Commercial bison – animals from which today’s bison products are made – are hybrid creatures. Their bison genes are polluted with cattle DNA.

Purebred bison – direct descendants of the animals that blanketed North America before colonization – are scant, protected and short on genetic diversity. Today, there are only about 1,500 purebred plains bison in Canada’s conservation herds, all descendants of 50 animals that managed to dodge hybridization in the early 1900s.

Now, scientists and Indigenous leaders in Western Canada are taking a crack at reviving the purebred bison population. It is a project grounded in science and blended with cultural significance. Researchers in Saskatchewan are building a genome biobank that would allow them to store semen and embryos. They believe they can dramatically deepen the purebred gene pool while quickly expanding herds.

“The animal of our ancestors – not some deformity that we created 100 years ago," says Blaine Favel, a Cree man who has worked in politics, academics, business and Indigenous circles and who is involved with the project. “It’s our spiritual brother."

Gregg Adams, an expert in reproductive biology, is leading the bison project at the University of Saskatchewan’s Western College of Veterinary Medicine. The scientists, after a decade of failure, have figured out a key step: how to collect semen and embryos from bison and freeze this genetic material without killing it. The team has also proved it can artificially inseminate bison by appointment.

The ability to transport and preserve genetic material is key because it solves two crucial problems: biodiversity and biosecurity. Experts believe the 4,500 bison in Yellowstone National Park are purebred; they could give Canada’s isolated bison access to an untapped source of genes. Ferrying embryos and semen over the Canada-U.S. border is simpler than transporting live animals in terms of health-and-safety regulations. It is also much cheaper – and easier – than hauling bison bulls, which weigh roughly 900 kilograms, and bison cows, which clock in at about 500 kg, around the continent for breeding.

Dr. Adams says he believes the project could produce 300 purebred calves over five years. Add another 15 years and Dr. Adams hopes there will be enough purebreds to cull hybrids out of existence and replace them with genetically pure bison. Some settlers, about a century ago, crossbred bison with cattle in hopes of making their cattle herds more resilient in the cold climate.

“It’s not like we’re turning back the clock thousands of years,” Dr. Adams says. "We have a chance to do this.”

His team has artificially inseminated roughly 100 bison cows, with a pregnancy rate of more than 40 per cent, as it worked to prove the reproduction strategy is viable. Hybrid bison cows will also contribute to the crossbreed population’s demise: A hybrid animal implanted with purebred embryos will produce a purebred calf, allowing scientists to accelerate the rate at which it can expand genetically pure herds.

Grasslands National Park, about 330 kilometres southwest of Regina hosts one of Canada’s few purebred bison herds. These plains bison stem from the herd in the Elk Island National Park east of Edmonton, but it is not their traditional home. Adriana Bacheschi, who oversees the park, says the plains bison in Grasslands are doing better than their counterparts in the more wooded Elk Island.

On their ancestral turf, they are healthier, fatter and their reproduction rates have gone up, Ms. Bacheschi says. The keystone species graze hard and their reintroduction has diversified the area’s plants. Animals on in the park are also returning to their old ways, with bison bunched together, some bulls wandering separately, and coyotes following at a distance.

“It just looks right,” she says. “There are a few of those little old patterns coming back.”

The herd grows by about 28 per cent a year, Ms. Bacheschi says, in part because it has no natural predators in the park. Parks Canada gives away purebred animals to conservation groups and Indigenous peoples to keep the size of its own herds manageable. And that is where Mr. Favel, a former chancellor at the University of Saskatchewan, comes in. He won a bison lottery run by Parks Canada and was awarded 20 female animals. He learned about the university’s bison project and donated his animals to the effort. The university now has 48 pure plains bison, which are officially called Bison bison bison.

The revitalization project, Mr. Favel says, could, at some point in the future, boost spiritual and economic reconciliation. Bison are “the most important animal for Plains Indians that the creator gave us" and the biobank could ensure the animals are healthy and survive, he says.

Indigenous peoples would have access to authentic bison items such as hides, meat and skulls. They could make, wear and sell traditional bison goods such as moccasins, Mr. Favel says. Tourists, he reckons, will want to see authentic bison and purchase traditional items. Hybrid bison meat sells for a premium and pure bison could surpass that markup.

“Our time on this planet is fleeting," Mr. Favel says. "If we can make it better than what we’re given, then that’s a really good accomplishment.”

Scientists do not have enough information to determine whether northern Alberta’s free-roaming wood bison – officially known as Bison bison athabascae – carry cattle genes. The wood bison that are known to be genetically pure all descend from 23 animals. Roughly 300 pure wood bison live in Elk Island, on the southern side of Highway 16, while roughly 400 purebred plains bison live on the northern side. The University of Saskatchewan has 38 purebred wood bison in its herd.

If the bison project is going to be a successful component of reconciliation, the strategy must combine traditional values with modern realities, says Leonard Bastien, a traditional knowledge-keeper in the Blackfoot Confederacy.

“There would have to be a business plan,” Mr. Bastien, who also goes by Leonard Weasel Traveller, which is the English translation of his traditional name. “It is about making money.”

At the same time, the bison – which he also refers to as buffalo – must end up in an area where they can sustain themselves.

“The lifeblood of my people is the buffalo,” he says. 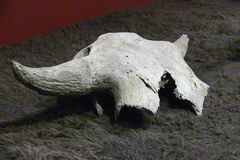 One Banff bison relocated to Rocky Mountain House after wandering out of park
August 9, 2019 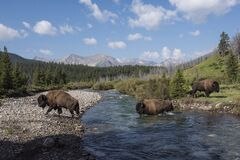 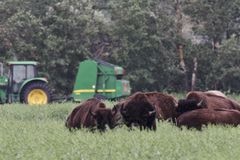