Alberta’s chief medical officer of health says immediate action is needed to reverse the rate of skyrocketing COVID-19 cases in the province.

“This is like a snowball rolling down a hill, growing bigger and faster, and it will continue unless we implement strong measures to stop (it). We must take action,” Hinshaw said Monday.

“Waiting any longer will impact our ability to care for Albertans in the weeks and months ahead.”

Hinshaw was to meet later in the day with Premier Jason Kenney and select members of his cabinet to discuss recommendations to reduce the caseload.

She reported 1,549 new COVID-19 cases on Monday. It was the fifth consecutive day with numbers above the 1,100 mark. There were 328 patients in hospital, 62 of them in intensive care. The death tally stood at 476.

Daily caseloads have more than doubled in recent weeks. In the first week of November, there were just under 600 new cases a day. On Sunday, Alberta led the entire country with 1,584 new cases, despite having a fraction of the population of Ontario and Quebec.

Front-line doctors and epidemiologists have called for a shutdown of businesses and activities to reverse the trend.

Kenney was to leave isolation later Monday after coming into contact with a person with COVID-19. He tested negative.

On Saturday, in a Zoom call with the Canada India Foundation, Kenney said new health restrictions are likely to come but he continued to reject a sweeping shutdown as intrusive and ineffective.

“We will likely have to take some more restrictive measures, given the current direction of things here. Because, ultimately, our goal is to protect the health-care system from being overwhelmed while minimizing damage to the broader social, economic, mental, emotional and physical health of society,” he said.

“(But) our point is we are not exclusively focused on COVID-19. We understand that for every policy in response to it, there are unintended consequences, so we’ve taken a holistic approach, and we believe that that has been effective.”

Kenney’s United Conservative government shut down many retail businesses, restaurants, recreation centres and schools during the first wave of COVID-19 in the spring. Most were allowed to reopen in May and June with health restrictions. Schools reopened in the fall.

In recent weeks, the province has taken targeted steps by limiting public gatherings in areas including Edmonton and Calgary and by forcing bars and restaurants to stop serving booze by 10 p.m. and close by 11 p.m.

The Opposition NDP has accused Kenney of failing to address core public health issues by not, for one, bringing in a provincewide mandate on wearing masks in public indoor spaces.

Many municipalities do require face coverings, but the NDP says seniors are particularly vulnerable in areas that don’t have them. Alberta is the only province in Canada without such a mandate.

“This is the greatest public health threat we have faced in our lives,” said NDP Leader Rachel Notley in a news release.

“When faced with great challenges, Albertans are always willing to roll up their sleeves and work together, but to do so they need leadership and a road map. So far, the premier has provided neither.”

Kenney’s government also had to deal with mixed messaging over the weekend.

Associate Health Minister Jason Luan told a video town-hall meeting Friday that the province was waiting to see how much COVID-19 pressure the health system could take before it moved ahead on restrictions.

Luan backtracked Sunday, posting on social media that his town-hall comments were “not accurate.”

Luan also stated: “I am not a spokesperson or involved in any decision-making around introducing new restrictions or hospital capacity.”

Meanwhile, some Alberta businesses are taking matters into their own hands by implementing extra COVID-19 restrictions.

Kelly Dyer, manager of Audreys Books in downtown Edmonton, says the shop has not opened its doors since March and only offers curbside pickup and delivery.

Dyer says there need to be more restrictions in Alberta and, if there are ways for businesses to operate more safely, they should.

Color De Vino in Edmonton only allows curbside pickup and delivery of its wine, beer and spirits as well. 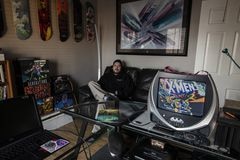 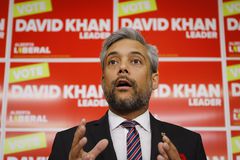