Sadie Riendeau had it all planned out. She would marry Kirby Braybrook in Waterton Lakes National Park, where her family vacationed year after year. Mountains, waterfalls, lakes, autumn leaves. The wedding would be outside, with 160 guests.

But then, last Wednesday, it started to rain. By Friday, snow. On Saturday, the bridal party posed for pictures outside, despite knee-deep snow. Come Sunday, some of the 130 guests who made it to Waterton were stranded in the park as a blizzard shut down southern Alberta.

“My dress was absolutely soaked,” the bride, who is now Sadie Braybrook, said Monday. “It felt like my dress was plowing the streets."

“I went up before the reception and had a bath and blow-dried my dress and we were good to go by 6 o’clock," Ms. Braybrook said.

The three-day storm blanketed Waterton with 95 centimetres of snow, a measurement that does not account for compaction. The snow measured between 50 cm to 60 cm in Lethbridge, about 150 kilometres from the park. Lethbridge College, the University of Lethbridge and scores of school divisions declared a snow day Monday. Police responded only to emergency calls. Libraries and businesses – including at least one mall – were shuttered. The city council meeting was cancelled. Power failures swept the area. Premier Jason Kenney on Monday called off an announcement tied to Highway 1A, near Calgary, because the storm’s aftermath made the highway unsafe.

But not everyone stayed home. Brenda Fettig walked an hour and a half Monday morning to her job cooking for Lethbridge’s Meals on Wheels. The snow was waist-deep in her yard and, at times, up to her knees as she tromped to work. The commute is, usually, a 10-minute drive.

“There are people depending on us,” Ms. Fettig said. “A lot of them are stuck in their homes.”

She prepared spaghetti and meatballs, along with garlic toast, and volunteers rallied to deliver the 88 meals.

The September storm, which stretched eastward into southern Saskatchewan, closed highways and will make harvest especially troublesome. An area west of Cardston, about 55 km northeast of Waterton, received between 70 cm and 90 cm. Cardston, like the Lethbridge area, is farming and ranching country.

And despite the storm’s size and snow dump, it did not bust through September records, according to Environment Canada. Lethbridge’s one-day September record, set in 1968, stands at 55 cm. The city’s three-day record is 100 cm, and was part of the 1968 storm. (The agency does not have records for Waterton). About 27 cm fell at Calgary’s airport, while the southwest side of the city was hit with about 32 cm after three days, compared with the one-day record of about 33 cm.

“Close-ish, but no cigar,” said Sarah Hoffman, a meteorologist for Environment Canada. “This was a significant event that had quite a few impacts, [but] it is just not that uncommon.”

There have been at least eight snowier Septembers in Calgary, she said. Environment Canada culls social media to calculate snowfall amounts where the agency does not have tools in the field.

Sadie and Kirby Braybrook, the newlyweds, hit the road Monday, headed for their home in Manitoba. Their indoor wedding, Ms. Braybrook said, was just as dreamy as the outdoor event she had in her head.

“It turned out to be a beautiful day," she said.

Accidents and anguish as snow arrives early on Prairies
September 30, 2019 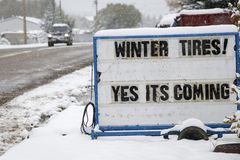