Throngs of teenagers spilled out onto a sidewalk along a busy Calgary street to protest expected changes to the province’s rules for gay-straight alliances, clubs meant to provide a safe space for LGBTQ students.

The boisterous demonstration outside Western Canada High school was one of many 20-minute walkouts across Alberta on Friday morning.

Premier Jason Kenney said during the election campaign his United Conservative government would replace the NDP-drafted education law with older unproclaimed legislation. That would have the effect of undoing some provisions for GSAs, including a ban on schools informing parents if their children join such a club.

“I think that if teachers are the ones telling parents, then that is the most impersonal way to come out,” said Aimee, a Grade 10 student who organized the walkout.

“Not only is it not safe for everyone, but it also should be up to the individual themselves to decide when.”

She declined to give her last name because she was concerned about online harassment.

The walkout was not meant to be a general repudiation of the United Conservatives Party, whose majority government was sworn in this week. Rather, it urged a change of stance on GSAs.

Youth held handwritten signs that read Keep Our Spaces Safe, Not Your Secret, and Hey Kenny (sic), Leave Us Alone – The Gays.

While most signs were about LGBTQ rights and GSAs, a few focused on other issues, such as climate change.

Grade 12 student Oscar Dewing said he’s not part of a GSA, but he left class Friday to show support for his classmates.

“I think this is the future of Alberta right here and I wanted to see it in action,” he said.

Police blocked off a stretch of road with pylons as passing cars and trucks honked.

A cluster of adults stood nearby cheering and holding signs in support.

Steve Gin said as a gay man he has benefited from past advocacy for LGBTQ rights, such as the push to decriminalize homosexuality decades ago.

“I feel it’s my duty to give back and give support to those that are being brave right now,” he said of the students.

Gin said he wished he had a GSA when he was growing up in small-town Saskatchewan.

“It would have made me feel like I could have been who I was a lot earlier,” he said, adding that allowing parents to be notified could force gay kids into conversion therapy and self-harm.

New Education Minister Adriana LaGrange said the UCP government does not support mandatory parental notification or “outing” of any student.

Kenney said during the campaign that students should be allowed to set up GSAs in their schools, but a blanket ban on telling parents is too blunt an instrument and teachers should decide on a case-by-case basis.

“We do strongly support efforts to make our schools in Alberta free from bullying by providing peer support, counselling and safe spaces for all students in our province, especially those subject to bullying or prejudice because of their sexual identity,” LaGrange said in a statement.

“As minister, I do want to meet with passionate, young Albertans to understand their concerns and clarify any misunderstandings about our position.” 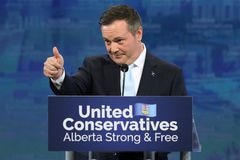