The mayor of a northwestern Alberta town is urging the province to get financial aid flowing quickly to evacuees, as firefighters prepare for shifting winds that could push a powerful wildfire toward the community.

Crystal McAteer of High Level said she called Premier Jason Kenney’s office on Thursday asking his government to sign off on pre-loaded debit cards for about 5,000 people who fled the town and nearby communities on Monday.

“We’re not as affluent as other communities and some of our most vulnerable people are out there right now without funds,” Ms. McAteer told reporters.

She said she thinks the cards — for gas, food and other expenses — should have been available at reception centres by now.

It took just over a week for such cards to be available after a wildfire forced the evacuation of the city of Fort McMurray in 2016. And in 2011, cards were made available for evacuees of the Slave Lake fire.

“Unfortunately, I have to say the danger from the wildfire is not over,” she said. “I understand that residents are missing their homes and I cannot stress enough that the danger is just outside of High Level and it’s very real.”

He said wind conditions are expected to be favourable over the next three days, but a shift in the forecast could push the blaze toward the town.

Firefighters have been conducting controlled burns on highways leading south and west from the community in order to remove fuel for the blaze. In the town, sprinklers have been set up and flammable debris is being removed.

The wildfire danger in the area is considered extreme because of warmer temperatures, gusty winds and no significant rainfall in the forecast.

Mr. Elliot said it’s been a challenge for fire crews.

“The extreme fire behaviour has limited our ability to safely put resources in portions of the fire,” he said. “However, we have been successful in actioning the fire on the east side and the north side in order to keep the fire from threatening the town of High Level.”

The province says 143 wildland firefighters are on the ground, as well as 154 structural firefighters in town. Out-of-province crews are expected to help out. There are also 28 helicopters, 10 structural protection units, along with air tankers and heavy machinery.

Patients have been safely removed from High Level’s hospital, but the emergency department is open and operating room teams are on standby to treat first responders and those providing essential services.

Smoke from wildfire drifts northwest, covering much of Yukon

Residents in many parts of Yukon are feeling the effects of smoke from a wildfire burning about 1,000 kilometres away in Alberta.

The thickest concentration is in east-central Yukon over the Mackenzie Mountains, south of the Arctic Circle.

Fire officials say the smoke is not from any of three active wildfires in Yukon.

The elderly or anyone in Yukon with heart, lung or chronic breathing problems is urged to stay indoors.

Smoke from the High Level wildfire has prompted Environment Canada to issue air quality advisories for the entire northwestern corner of Alberta, the Fort Nelson region of northeastern British Columbia and the Watson Lake area of southeastern Yukon.

Alberta wildfire season off to aggressive start with significantly more land burned than usual
May 22, 2019 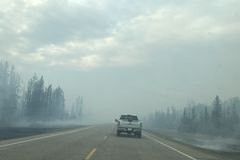