The pitched reaction to Edmonton’s remodelled downtown library has morphed into the latest instalment of the city’s rivalry with its southern neighbour, Calgary.

Renovations on the Stanley A. Milner Library have been going on for months, but this week Edmontonians took notice of the dark, angular, futuristic redesign.

Memes have surfaced online comparing the building to everything from a military tank to a cruise ship. Some have posted side-by-side photos of Calgary’s award-winning Central Library and its Edmonton counterpart.

Edmonton Public Library chief executive Pilar Martinez said much of the online backlash against the redesign came as a shock to staff.

“We were dismayed, particularly given that the project has been under way for over 2½ years and it has been in a similar state for several months,” Ms. Martinez said. “People need to give it some time before they make a final judgment on the appearance of the exterior.”

The building has been closed since 2016 and is not scheduled to reopen until next February.

Much of the furor seems to stem from the difference between artist renderings released before construction and what people are seeing now.

Ms. Martinez said the project has undergone some changes. Renovations were initially budgeted at $62.5-million and increased to $84.5-million after asbestos was removed and the old building was brought up to code.

She also said it isn’t fair to compare Edmonton’s library with Calgary’s new building because both cities have different histories and municipal budgets.

At $245-million, Calgary Central Library cost almost triple that of the Edmonton renovations.

“Unlike Calgary, we were working within an existing structure,” Ms. Martinez said. “That brought with it having to work around pillars … and not being absolutely free in creating a space from scratch – and there are some advantages to that.

“We shouldn’t be pitted against each other.”

Ms. Martinez said she hopes people will have a different reaction when the library reopens its doors. “[People] should experience it in its fullness, rather than what it looks like at the moment.”

Trevor Boddy, a Vancouver-based architecture critic, said the Edmonton library was designed from the inside out.

“What you have are these multilevels of bridges and spaces to study, talk, walk and even have coffee with light streaming down from above,” said Mr. Boddy, who grew up in Edmonton.

“I think it will be the first building of the 21st century in downtown Edmonton – and good on them.”

Teeple Architects did not respond to a request for comment.

Historically, Edmonton has had a more advanced art and architecture scene, Mr. Boddy said, but in the past couple of decades Calgary has surged ahead because the city has more money and a larger community of designers.

“There always has been a rivalry and always will be,” he said. “I don’t necessarily think it is a bad thing.”

Mr. Boddy pointed out that the new Calgary library was not well received before it opened late last year. Many questioned whether it would be viable to have light-rail transit run below it, and the building was also compared to an ocean liner.

“To me, controversy around a new building is usually a sign that something has gone right, not wrong,” Mr. Boddy said.

“That’s because they are doing something unusual, innovative or groundbreaking that catches the eye, which might scare people or confuse people, but then they go on to be much loved.” 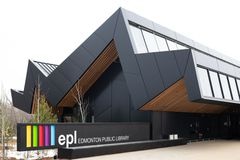 Opinion
Ottawa is building a new central library. The city should take a lesson from Calgary – you get what you pay for
Subscriber content
November 28, 2018 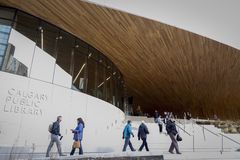 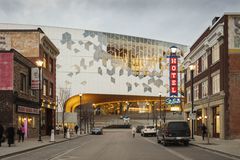