At the end of 2016, the regional municipality that includes Fort McMurray bluntly declared it would not entertain property buyouts from residents in flood-prone areas of the community. Hundreds of people in these zones lost homes in the 2016 wildfire, and by snubbing the idea of buyouts as part of the rebuilding plan after the blaze, Fort McMurray was betting its new (but incomplete) flood-mitigation strategies would protect residents from future natural disasters.

Now, some officials are almost begging homeowners and businesses in its frequently flooded zones to consider packing up in exchange for cash or land elsewhere.

The attitude adjustment follows flooding this spring, a disaster that washed over five areas of the city, including parts of downtown, and forced 13,000 people to flee. Recovery costs from this single flood already outpace the budget for Fort McMurray’s long-term flood mitigation plan.

The Athabasca and Clearwater rivers flooded after a 25-kilometre ice jam plugged the former in late April. The flood, calculated to be a one-in-100-year event, prompted officials to rethink Fort McMurray’s $290-million flood-protection strategy, which relies heavily on infrastructure such as berms and raised roads. City bureaucrats will include buyouts and land swaps in some neighbourhoods as serious options for council to consider later this month.

But moving people out of flood-prone areas, or preventing them from building in the first place, while effective, is often stymied by emotional attachments to neighbourhoods and political timidness.

Matthew Hough, deputy chief administrative officer for the Regional Municipality of Wood Buffalo, said that while it will ultimately be up to communities to decide whether buyouts are palatable, Fort McMurray cannot count on other levels of government to come to its financial rescue every time the rivers overflow.

“This is going to be a very personal issue for the residents [and businesses] involved,” Mr. Hough said in an interview. “However, we can’t ignore the math.”

Insurers paid out $228-million by June 1 and the Alberta government earmarked $147-million for relief with respect to the April disaster. Combined, this cash tops Fort McMurray’s flood-mitigation budget by $85-million. Further, the city has already spent about $150-million of its $290-million multiyear mitigation budget on flood infrastructure, which proved ineffective against nature this year.

Mayor Don Scott recently told a local radio station that he warmed to buyouts and land swaps after surveying the extent of this year’s damage. “It was the last straw for me,” the mayor said in late June. “We can’t keep exposing everybody to this situation.”

But governments struggle to persuade – or force – residents to give up easy waterfront access. Alberta, after the 2013 floods, tried to restrict and roll back development on floodplains across the province. It offered buyouts to roughly 250 property owners, and earmarked about $175-million for the effort. By 2017, it had paid a collective $92.9-million for 94 homes. (The deal excluded Fort McMurray and Drumheller, where large portions of the floodways were developed). The New Democratic Party, when it was in power in Alberta, tried to tame development on floodplains, too, but made exceptions when mitigation measures were implemented. That caveat, in turn, cleared the way for Fort McMurray to rebuild after the 2016 fire.

Nandita Basu, a research chair in water sustainability and ecohydrology at Ontario’s University of Waterloo, said technology such as berms creates a false sense of security for governments and citizens. When cities succeed in mitigating smaller floods, development creeps further onto flood plains, which means greater damage when larger floods do happen.

“We tend to trust technology a bit too much,” she said. “We don’t always talk about the limits of our abilities.”

Homeowners are more likely to resist buyouts if they are mandatory and come shortly after a disaster, according to Anna Ziolecki, a director at Partners for Action, which focuses on increasing Canada’s flood resiliency in a changing climate, at the University of Waterloo. Governments are more likely to win over residents with offers that reflect the pre-flood market value of property, costs such as moving, and intangible factors like the lifestyle benefits a certain neighbourhood may offer. (In 2013, Alberta offered homeowners payments equal to their last municipal property-tax assessment).

Politicians, she said, should protect residents by combining technology with property buyouts.

“Sometimes it is not a politically popular policy to propose, but I think as our climate continues to change and we continue to see these extreme weather events that cause such damage … we have to look at property buyouts as an option.”

Communication must be part of flood resiliency plans, rather than just engineering solutions such as floating foundations and levees, according to Julia Baird, who holds a Canada Research Chair in human dimensions of water resources and water resilience. Communities, she said, are more likely to get on board with buyouts and land swaps if they feel like they grasp the challenges, are included in the decision-making process, and understand why politicians opt for one policy over another – even if they disagree.

“It takes away a lot of the criticism of these sorts of decisions,” the Brock University professor said. Her research found roughly 84 per cent of Canadians would be at least somewhat willing to move off a flood plain if adequate compensation was available. 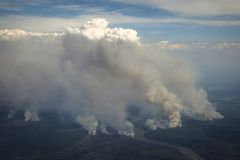 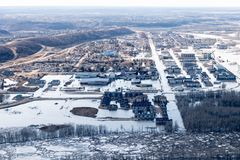 Fort McMurray homeowners clean up as insurance questions linger after flooding
May 10, 2020 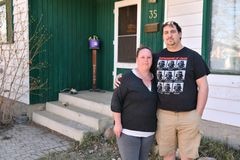