With days left before she retires, Dawn Farrell has some advice she warns is controversial. Asked to reflect on the lack of women at the top rungs in corporate Canada, the chief executive of TransAlta Corp. says as a starting point women themselves have to choose to stay in difficult, high-pressure jobs – even when there’s fierce jockeying for positions, even when they would rather not deal with the fights and conflict.

Ms. Farrell, 61, has long been one of those rare CEOs who voices opinions beyond the platitudes contained in quarterly earnings reports. And as often the only woman in a room full of male business leaders, she has also been a standard-bearer for women at the top levels of corporate Canada.

Her last day on the job is Wednesday, and now-chief operating officer John Kousinioris will take over the top spot the next day. By then, Ms. Farrell and her husband, Brendon, will be on the road to their Vancouver property. “And we’re going to goof off,” she says.

Her retirement comes after working at Calgary-based TransAlta for most of the past 35-plus years, save for a stint at BC Hydro. She has been CEO of the large public company for nine years. Famously, Ms. Farrell guided the more than 100-year-old power giant through the existential crisis of the Alberta government announcing a much quicker than expected phase-out of coal-fired power (“I was very afraid we were going to lose the company”). At that time in 2015, nearly half of the province’s electrical generation capacity came from nine coal-fired generating units operated by TransAlta.

The company’s share prices plummeted. Then came the long crawl out of that hole with provincial government “off coal” compensation, and later an infusion of funding from Brookfield Renewable Partners so TransAlta could implement a transition to natural gas and renewables. By the end of this year, the company will have completely transitioned off coal in the province – a key part of the dramatic drop in Alberta’s use of coal for power, and a (little-known) climate success story.

“I started in a regulated utility in 1985, and I left behind a commercial and competitive company that is going into the future of low-cost, green power for customers,” she says.

Ms. Farrell’s tenure has also been marked by inclusion and diversity commitments. Women, already well-represented on the TranAlta board, will have to make up 50 per cent of the board by 2025. By 2030, the goal is to have women make up 40 per cent of the company’s total work force. Other pledges include commitments to hiring a diverse work force and to having all 1,500 employees undertake Indigenous cultural awareness training within two years.

Still, Ms. Farrell and Rona Ambrose – the former federal interim Conservative leader who sits on TransAlta’s board – have commiserated about the guilt they’ve felt in leaving high-profile positions, when their work is also an important representation of women in power.

“When I look at how few women there still are, it’s tough. It’s really tough,” Ms. Farrell says about her decision to retire, in an interview with The Globe and Mail.

University of Calgary chancellor and business commentator Deborah Yedlin wrote this month that when Ms. Farrell departs, there will only be two prominent female CEOs in Canada’s energy sector: Nancy Southern at ATCO Ltd. and Sue Riddell Rose at Perpetual Energy Inc.

Across Canada, the statistics are not much better. Women hold about one-fifth of all board seats among all TSX-listed companies – among those that disclose such information – according to a diversity report from Osler, Hoskin & Harcourt LLP. Just 4.4 per cent of TSX-listed companies have a female CEO.

“People have thrown a lot of things at this, and it has not changed as fast as it needs to. How do we make sure we’re not having this same conversation 10 years from now?” says Cécile Siewe, a long-time engineer for Shell Canada who now heads an Alberta-based federal research centre focused on reducing the environmental effects of resource extraction.

“Societal infrastructure needs to be there so women can be fully present at work. That mean the daycares and all of those support systems, so when a woman goes to work she really can just focus on the work,” Dr. Siewe says.

“Mentoring is great. Coaching is great. But in addition to that, we need a lot more of the senior leaders in organizations to really champion those female employees who show talent and inclination.”

In Ms. Farrell’s case, she wasn’t born into money but into a family with a strong sense of entrepreneurship. In a Business Council of Canada podcast last year, she says her parents were teenagers when she was born and she was brought home from the hospital to a trailer in Calgary’s blue-collar Forest Lawn neighbourhood. Her mother worked in the family’s dress shop, and her father was a heavy-duty mechanic and beekeeper.

Her family was loving, valued education and taught her tenacity. She was the first to go to university, side-stepping a career in journalism – which she at one point aspired to – when she realized she would rather be running a newspaper than reporting at one.

The TransAlta CEO is famously frank, including about her own struggles. She has called herself a “lousy leader,” and spoken about regrets and missteps in her career – including the times she has lost her temper. She has always strived to be less blunt, and less intense.

But it’s hard to find critics in downtown Calgary these days. Alex Pourbaix, CEO of oil sands producer Cenovus Inc., says he looks to his friend’s multiple jobs and roles at TransAlta as part of why she was so successful. He wants to see other women be able to get that kind of “breadth of experience, that really gave her the leg up on getting into the executive suite”

Ms. Farrell has other counterintuitive points of advice for women aiming to climb the corporate ladder, saying women need to “marry well.” But she doesn’t mean this in the old-school sense of securing a wealthy husband.

To her, it means finding a partner who’s supportive of women’s work and is serious about sharing the unpaid burdens of housework and child-rearing. She has two grown daughters and four grandchildren. Years ago, she says her husband walked the talk as he stepped back from his own work as a carpenter when her career took off. “We really wanted a strong family.”

She doesn’t let men in the corporate world off the hook, either. Lowering her voice to imitate a man, she mocks the words of men in business who tell her, “Well, I’d like to put some women on my board but …”

She insists strong female candidates are there to be found, if people look. “I go to the men, and say, ‘Come on guys. Cut the crap.’”

Mr. Kousinioris has the tough job now, she adds, as “he’s the CEO that has to make it all come true on the diversity front. Ask him how he’s going to do that.”

She says in retirement she’s “not inclined to do anything,” and then, “I’m doing whatever I want.”

But she will still be the chancellor of Mount Royal University, and her friends and former rivals say her energy levels mean she’s unlikely to stay away from issues she cares about, such as public policy and diversity, for long.

“I don’t see Dawn retiring from that purposeful approach,” says Ms. Southern, who describes Ms. Farrell as a “worthy competitor” in the power business.

“In fact, this might give her a little bit more time.” 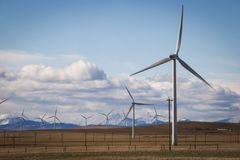